"Family Cemeteries" Have a Uniqueness in Appalachia, Represent a Special Commitment to Family

Mountain people know, but for those who don’t, these are “family cemeteries.” 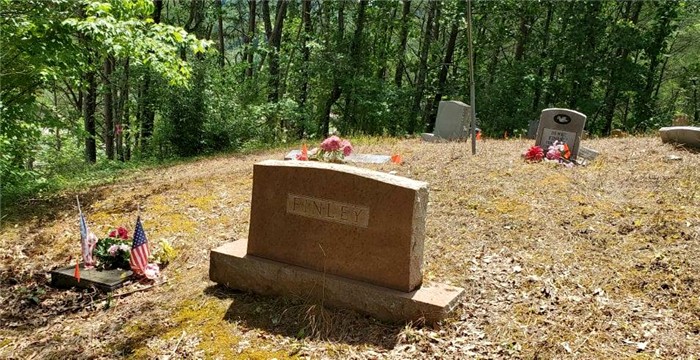 Hoskins Cemetery on Island Creek Hill off U.S. 421 in Manchester, Kentucky
The School Board (CCBOE) in Clay County is attempting to relocate this Historical Cemetery & the
"David & Goliath" style dispute between friends of the 128 year-old Burial Ground and the (CCBOE) has now landed in Federal Court (Photo) ClayCoNews

To those who travel down the Hal Rogers Parkway in southeast Kentucky, one of the most interesting sights you’ll come across are tiny precious cemeteries up on hillsides, speckled along the highway.

Mountain people know, but for those who don’t, these are “family cemeteries.” They have a studied uniqueness in Appalachia in general, maybe more so in Kentucky, Tennessee and Virginia, among other Appalachian states. Deep in the folds of these mountains, down narrow, snaky roads, are more cemeteries, sitting up on hillsides, close to farms and houses. They’re decorated with mementos (many of them plastic to withstand the weather) to honor and remember the deceased. To be in an area of the country where these cemeteries still exist is not so much quaint as it is a blessing. It means you are in a place where family is deeply honored. History is deeply honored and is part of everyday life, not out of sight and mind and smothered by video games and social media.

Some graves have been there since the Revolutionary War. They are looked after by the descendants of those buried there, many of whom live in other towns, even other states and who are happy to travel the distance to reconnect. They are proud of their people and consider these plots “sacred ground.” They will come quietly, individually or in groups, clear out fallen branches, mow and weed eat the grounds and tend to the many monuments that still exist as well as the newer ones. Many will carry sidearms to guard against snakes – rattle- snakes and copperheads abound in this area and are dangerous. You will see these folks walk from gravestone to gravestone, pausing to brush off some debris. If there are families, you might hear parents explaining to their young children in soft voices, just who their ancestors were. It is fair to say many of these descendants would rather be buried with their ancestors in these bucolic spots and eschew the more fancier graveyards where they presently live. These are historic meeting places for countless families with roots in this area and are places where generations can come back and give thanks to their Creator and their ancestors for their histories and their very lives.

Why these small family plots? One reason is because the majority of Southeast Kentucky didn’t have much in the way of roads prior to the 1940s and the WPA, which built highway 421. Kentucky became a state in 1792, and prior to then people were limited to wagon trails at best between what would become county seats. Between hollars the “roads” were horse and foot paths and stream beds. According to Edward Slavishak, who wrote Proving Ground: Expertise and Appalachian Landscapes, “Only after World War II did the state pave the 34-mile route south out of Hyden to Harlan and the 29 miles west to Manchester.” Those that lived in the hollers of this country had to rely on themselves and neighbors for their very survival, and when the time came, for the care of their deceased family members. Safe to say, it’s unknown if all of the buried even had caskets, or were instead interred wrapped in a favorite family quilt. These were tough, gritty people. What some present-day folks might not intrinsically realize is, without the pure grit of those who lie in these little plots, they, themselves might not have ever existed.

There are laws in Tennessee which protect family burial grounds if they are recorded in a deed, and in Virginia landowners must allow access to family burial grounds for the purpose of visitation and genealogical research. (see nolo.com and dhr.virginia.gov). Cemeteries, even if privately owned, are “properly classified as a ‘public cemetery’ where it consists of a great number of burial plots,” according to Stimmel-Law. In Kentucky, KRS 381.690 stipulates:

“Whenever any burial grounds lie within the corporate limits of a city the governing authorities of the city shall protect the burial grounds from being used for dumping grounds, building sites, playgrounds, places of entertainment and amusement, public parks, athletic fields or parking grounds.”

Which begs a question, what about the family descendants who live away from the area? Should it be presumed that because an individual does not live in the particular area where their relatives are buried, do they therefore have no standing in the discussion of the remains of their relatives? In Burial Practices in Southern Appalachia, a nicely done thesis by Donna W. Stansberry, she quotes Laurel Shackelford and Bill Weinberg for the reason:

“When people join together in sorrow, as rural families have done a million times
over, they find strength and unity. Over the years this unity broadens into a deep,
personal feeling that tells mountain people they belong. People elsewhere had this
sense of belonging too, but the feeling was heightened by the isolation and repose of life deep
in a mountain hollow. Once mountain people attained a harmony with self and home (for many it
was their birthright) it became indelible, yielding to neither distance nor time.”

So why did the descendants of these people leave the area? For the most part, they didn’t really want to, but Appalachia in Kentucky has always been known for its coal-mining. Many land owners whose ancestors might have earned their land from Revolutionary War service lost it when it was discovered coal was under their soil. Those who owned the minerals, sometimes sold to pay taxes, were able to mine the coal without regard to the development of the land on top of it.

Coal became so pervasive that it became the only way many people had to be employed. As much as Appalachia was long an agricultural community where living off the land was the norm and bartering was common, there were times when money was needed. Taxes, marriage bonds, transference of titles, all required cash. There were no bustling cities around, no factories, or other such employers giving competition to the coal operators. There were very few choices. Coal companies originally made themselves central in the lives of the population by paying their employees in scrip which could only be used in “company stores,” with inflated prices. Miners and their families lived in coal camp homes of the most basic construction to be close to their work places. Appalachian families essentially lived under the thumb of the operators, such that after the world wars and Korea, when men were returning to the mountains after “seeing the world,” they realized there were a lot more opportunities to be had in other places. For the sakes of their families and their welfare, they moved to bigger cities for better opportunities. Happening between the 20s and the 60s, it was a social phenomenon referred to as the “Appalachian Migration.” The road to the factories in Ohio and Michigan was called the “Hillbilly Highway.”

So they left. Many who served in the Armed Forces took advantage of their benefits and went to college. They married before they left or after they arrived. Sometimes they married and lived apart during the week. They raised families in other cities, but they were still deeply tied to their people back in the hollers. For the most part their parents were still alive for a while, and some siblings still lived nearby. They kept in touch and they visited often. Often more than not, upon retirement, they would move back to the hills they loved so much.

I was not born in Appalachia. I would have been had my father not insisted on driving back to a Lexington hospital when my mother went into labor. That was a long trip for my mother in the 50s up N 25. But my pedigree is as fully packed Appalachian as anyone presently living there, and I was brought up in the old ways. We lived in a Lexington suburb, but we did not listen to Benny Goodman – we listened to the Carter Family, the Osbornes and others. My father built a mini-farm in the back yard where he grew vegetables, three kinds of grapes, peach trees, cherry trees, apple trees, and different cane fruits. We didn’t party in the backyard, we shucked corn and broke beans. My mother canned diligently. My father hunted and fished and often took me with him. We played music, all of us. My sister wore hand-me-downs from my mother, and I wore them from her. Both of my parents were teachers with modest salaries, but we wanted for nothing, and we thought we were rich.

Very often we made the trip back to Leslie County to visit our people. And we visited our cemeteries. We would move through the tombstones and then go to sit on the porches and talk and play music. (You’ve not really heard a banjo till you’ve heard it filter down through the holler). My parents were determined that we would always know who our people were and where we came from. Eventually my grandparents passed on and then my parents, aunts and uncles. They all were buried in our family cemeteries. Those of us who are left make sure the cemeteries are being taken care of and we go as often as we can to visit with them again. A shout out to the police forces there, one of the smartest decisions I’ve ever heard of is that the detention centers have offered their inmates the choice of working on family cemeteries instead of sitting all day in the jails, and the inmates are all for it. I think when they realize how much ancestors are appreciated, it helps them feel better. I know a peace comes with me when I leave and drive the three hours back to my home. I cannot believe that could be a bad thing for anyone concerned. I know one day I’ll make that trip and not return. 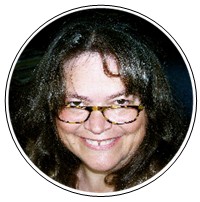 Lyn Hacker is a Lexington native raised by Appalachian parents to be not only educated but proficient in the living arts – working very hard, playing music, growing gardens, orchard management and beekeeping. The UK graduate is an award-winning writer and songwriter and has been a newspaper staff writer and production manager, a photography lab manager, a Thoroughbred statistics manager, a registered respiratory therapist, a farmer, a horsewoman, and a beekeeper. She lives on a farm in Sadieville.