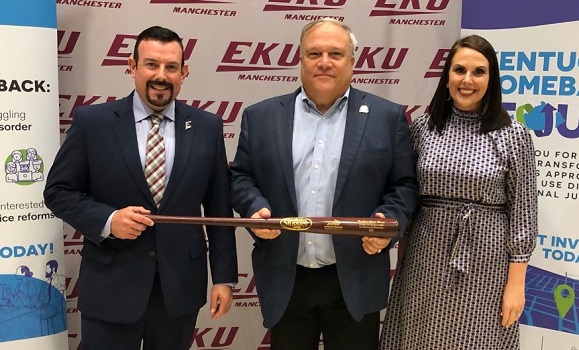 The presentation took place during an event hosted by the Chamber’s Kentucky Comeback initiative at EKU’s Manchester Campus, in partnership with Volunteers of America Mid-States, to discuss transforming the Commonwealth’s approach to criminal justice reform and substance use disorder.

President Stivers was among a select group of legislators who “went to bat” for Kentucky business during the 2022 Kentucky General Assembly by displaying conspicuous actions to strengthen business, improve competitiveness, and ensure growth.

Recipients of the Kentucky Chamber MVP Award show strong leadership for the business community by sponsoring or carrying Chamber priority legislation to final passage, showing leadership on passage of critical legislation to improve Kentucky, or by taking hard votes in defense of business.

During the 2022 session, President Stivers played an important role in ensuring passage of House Bill 499, the Employee Child Care Assistance Partnership, including testifying on the bill in Senate committee. Additionally, he advocated for Chamber priority legislation including House Bill 8, legislation to make Kentucky’s tax code more competitive by phasing out the state income tax over time.

The 2022 General Assembly saw monumental progress on several critical priorities of the Kentucky business community, and the pro-growth policies passed saved Kentucky businesses an estimated $1.281 billion, roughly $19,000 for each employer in the Commonwealth.

While monitoring the progress of bills that create a better business climate and advance the Commonwealth, the Chamber tracks how each legislator votes on these bills. The Chamber’s MVP award recipients displayed more than just a business-friendly voting record, but also went out of their way, and at times across party lines, to support or oppose an issue critical to the business climate in Kentucky.

Learn more about business issues during the 2022 Kentucky General Assembly in the Kentucky Chamber’s “Results for Business” publication.