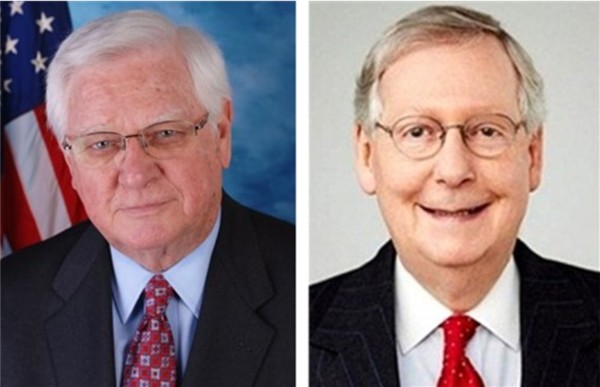 The federal funds come from the Southern and Eastern Kentucky Section 531 program that Congressman Rogers established in the Water Resources Development Act (WRDA) of 1996, setting aside funding exclusively for improvements to publicly owned wastewater treatment and clean water systems in Southern and Eastern Kentucky through the U.S. Army Corps of Engineers. Including this announcement, $42 million have been invested through this program to improve water and wastewater systems across Kentucky's Appalachian region.

"We are doing a lot of things right in Eastern Kentucky, by comprehensively investing in every aspect of our communities. We can't invest in better healthcare, agriculture and job creation activities, without also investing in clean water and reliable wastewater projects – they work in tandem with one another. These project awards will go a long way to shore up those infrastructure needs in Perry, Knott and Pike counties," said Congressman Rogers. "This is the 25th anniversary of the program, and I was pleased to raise the cap to $100 million, protecting this program for years to come. I appreciate Senator McConnell's support of this program each year and working together for the benefit of the people of Eastern Kentucky."

Last year, Congressman Rogers increased the authorization level for the Section 531 program by $60 million in the 2020 WRDA legislation, capping the exclusive fund to Southern and Eastern Kentucky at $100 million. The program was also expanded to include four more counties, including Boyd, Carter, Elliott and Lincoln. Senator McConnell has been a strong supporter of the Section 531 program, guiding federal funding for the program through the Senate since inception.

"With today's announcement, Eastern Kentucky residents will receive critical funding for important water infrastructure improvements, helping to promote much-needed economic development in their region. I was proud to secure an increase to this program's authorization limit through the Water Resources Development Act of 2020 to provide these types of resources to communities across Kentucky," said Senator McConnell. "My friend Representative Hal Rogers established this constructive program and together, we will continue to fight for Eastern Kentucky and work to ensure all its residents are provided with clean, accessible water and sewer services."

Eastern Kentucky PRIDE, an environmentally focused non-profit organization launched by Congressman Rogers in 1997, works with the U.S. Army Corps of Engineers to ensure water and wastewater needs are met in local schools and communities.

"PRIDE is often recognized for our massive volunteer spring cleanup campaigns across the region, but we have been proud partners for a number of Section 531 projects to make sure our streams stay clean by eliminating straight pipes and expanding access to sanitary wastewater resources and clean drinking water," said Tammie Nazario, President/CEO of Eastern Kentucky PRIDE.

The City of Hazard was awarded more than $1 million to construct a new raw water intake structure in the tailwater channel of Buckhorn Dam, which will supply water to a proposed new water treatment plant that will provide reliable water service to residents and local businesses.

"This is the first of many steps needed to get clean drinking water where its needed the most. Building a new water intake in Buckhorn will pave the way for a new water treatment plant that will not only be able to serve the Buckhorn and Chavies communities, but also the Coalfields Regional Industrial Park and neighboring counties," said Donald "Happy" Mobelini, Mayor of Hazard.

The Troublesome Creek Environmental Authority will use federal funding to extend wastewater removal service to 159 more households in several subdivisions along the Highway 80 corridor in Perry and Knott counties.

"I want to extend my thanks to the Troublesome Creek Environmental Authority board, Kentucky River Area Development District (KRADD) staff, Knott County Judge Executive Jeff Dobson and Perry County Judge Executive Scott Alexander for working together to provide these services to the people of Knott and Perry County. Also, a special thanks to Congressman Hal Rogers and his staff for their continued support," said Don Gibson, Board Chairman of the Troublesome Creek Environmental Authority.

"The majority of Elkhorn City's 569 water customers are served by a single water tank located on Stillhouse Avenue. Due to the aged condition of the tank, our customers will be better served by replacing the tank instead of doing a major rehabilitation of the existing tank," said David Sanders, City Engineer for Elkhorn City. "Additionally, the city customers in higher elevations of the City occasionally have water pressure problems that will be alleviated by the placement of the new tank. The new tank will provide consistent water service to our community for many years in the future."