The Hyden and Leslie County Community has lost a Local Treasure with the recent passing of Charles Ray Brewer. Ray was born in Hazard Kentucky on November 16 of 1961 and departed this life at 11:50 pm on October 8, 2019 at the Greg and Noreen Wells Hospice Care Center in Hazard, KY. Ray was a beloved father, husband, Pastor, co-worker and friend. 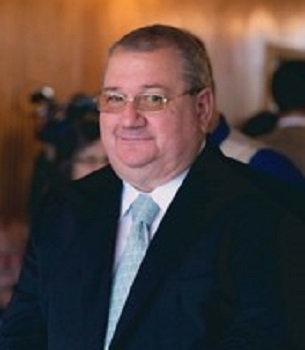 He was preceded in death by his Grandparents Bessie and Charlie Haley and Charlie and Oma Brewer, his parents, Wilma and Charles Barton “Bud” Brewer, his Uncle Bill Haley and his in-laws, Bob and Betty Begley. Ray leaves surviving his beloved wife of 34 years, Elaine, and their son Robert Barton Brewer. Two Brothers, Gary Brewer and Renee, and James Brewer and Tammy. Two sisters, Darlene Campbell and Kelly and Cindy and Patrick Wimsatt. Aunt Alice Pennington and husband John. Two nephews, Charles Dirk, and Ben and five nieces, Katie, Sarah, Charley Katrina, Tess and Gwen. And his special Aunt Bea Haley, who stayed by Rays side during his final hours.

Ray was also a lover of animals, especially his fur babies. He was preceded in death by his beloved Eunice and leaves behind Bear, Sister, Sweetie and Snoopy.

For almost 40 years, Ray acted as a vital part of the Hyden Citizens Bank organization. He had many roles over the years at HCB before finally becoming Assistant Vice President and Security Officer. His dedication to Hyden Citizens was second-to-none, devoting countless hours to the betterment of the bank and the community as a whole. Ray was quick with a smile and a laugh for everyone that came in the doors of Hyden Citizens Bank.

Ray was passionate about giving back to the local community, acting as both a leader and volunteer to several organizations in and around Hyden. For many years, Ray served as a member and Elder of Wooton Presbyterian and went on to Pastor The Lord’s House. Ray was a team leader for the Leslie County Relay for Life and raised thousands of dollars for cancer research. He devoted every Veteran’s Day to honoring Leslie Countians past and present who have served their country. He worked with Big Creek Mission’s The Well and The Pantry, raising money to feed families in need. And he had a special connection with Santa Claus, making sure Father Christmas arrived in Hyden every year at least once to the delight of hundreds of children.

And while Rob is Ray’s only biological child, he had several of what he called “Children of the Heart.” These were special young people that Ray took an interest in over the years and cared for like they were his own: Ann Marie Melton, Jessica Lewis, Staci Farmer, Kaitlyn Bray, Scott Cornett, Joel Brasher, Frank Baker II, Brent Morgan and Tessa Farler.

A gathering for friends and family will be held at the Dwayne Walker Funeral Home Sunday, October 13 at 1:00 P.M. with a Memorial Service to follow at 2:00 P.M.. The following will serve as pallbearers; James Brewer, Gary Brewer, Robert Brewer, Kelly Campbell, Bill Brewer, Frank Baker, II, Brent Morgan & Dan Woods.

In lieu of flowers, the family asks that donations be made to the Leslie County Relay for Life.

You may send your condolences to the family @dwaynewalkerfuneralhome.com