FRANKFORT, Ky. (June 10, 2019) – With the mercury levels on the rise this week, KSP is renewing its plea for parents to be extremely cautious about leaving children in hot cars. It may seem like common sense, but statistics show that these deaths are on the rise in the U.S. 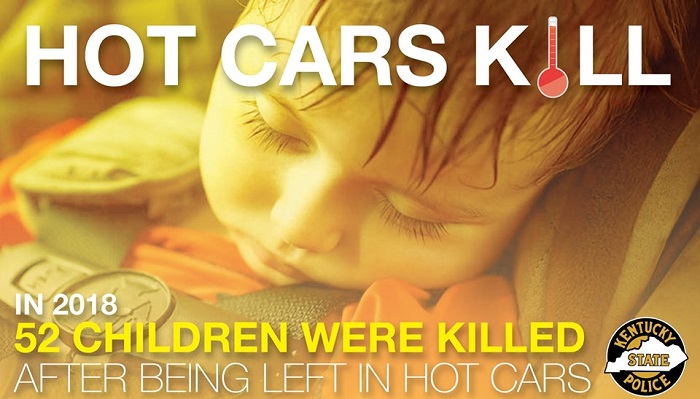 According to the safety organization Kids and Cars*, 52 children died in 2018 of hyperthermia as a result of being left in a hot car, this is nearly a 21 percent increase over 2017 death totals, in which Kentucky accounted for three of those. Since 1998, there have been 25 child-related vehicular heatstroke deaths in the Commonwealth. These include instances where a child has been forgotten in a car, accidentally locks themselves in a vehicle or, in a small number of cases, when a child has been intentionally left in a car.

KSP spokesman Sgt. Josh Lawson says vehicular heat stroke is often misunderstood by the general public. A majority of parents are misinformed and would like to believe that they could never ‘forget’ their child in a vehicle.

“The most dangerous mistake a parent can make is to think leaving a child alone in their car could never happen to them,” says Lawson. “In these fast-paced times, it is easy for parents to get distracted and forget their child is in the car with them.”

Lawson advised that the increasing number of children dying in hot cars is reaching epidemic proportions.

“A child’s body heats up three to five times faster than that of an adult,” adds Lawson. “The temperature inside a car can rise 19 degrees in 10 minutes. Depending on the circumstances, an infant could die of hyperthermia in just 15 minutes on a 75-degree day.”

Lawson says another component to these tragic deaths is the inquisitive nature of a child. Far too often, a youngster will be playing outdoors and end up in a car, locking themselves inside of the vehicle.

“Children are curious in general. They may have the ability to climb into a vehicle to explore and play. Once inside, they are quickly affected by the heat, becoming disoriented and unable to escape,” adds Lawson. “In extreme summer heat, a child can become incapacitated in a very short time.”

In 2000, Kentucky passed “Bryan’s Law,” which makes a person liable for second-degree manslaughter or first-degree wanton endangerment for leaving a child younger than eight years of age in a motor vehicle where circumstances pose a grave risk of death. The law was named after 11-month old Bryan Puckett, who died July 13, 1999 after being left in a hot car by his babysitter.

• Never leave a child in an unattended car, even with the windows down.
• Make it a habit of opening the rear door of the car every time you park to ensure no one is left inside.
• To enforce this habit, place an item that you can’t start your day without such as a purse, briefcase, employee badge, phone, etc.
• When at home, keep your vehicle locked at all times, even in the garage.
• Never leave keys within reach of children.
• If a child is missing, immediately check the inside, floorboards and trunk of all vehicles in the area.
Lawson says while a person will face criminal charges for leaving a child in a car, the pain and guilt from making such a devastating mistake will last far longer.

KSP asks citizens to keep an eye out for children left in vehicles on hot days and to call 911 if they see an unaccompanied child in distress.