McConnell is proud to highlight hemp in Kentucky and continues to support farmers, processors, manufacturers in the
Bluegrass State as they navigate opportunities and challenges for hemp

WASHINGTON, D.C. –  U.S. Senate Majority Leader Mitch McConnell (R-KY), a senior member of the Senate Agriculture Committee, on Thursday, July 25, 2019 welcomed Brian Furnish of Cynthiana, Kentucky, as a panel participant for the full committee hearing on "Hemp Production and the Implementation of the 2018 Farm Bill." The Committee also heard from representatives from the U.S. Department of Agriculture, the Environmental Protection Agency, and the Food & Drug Administration to discuss their various roles in addressing the opportunities and challenges hemp growers and processers face. 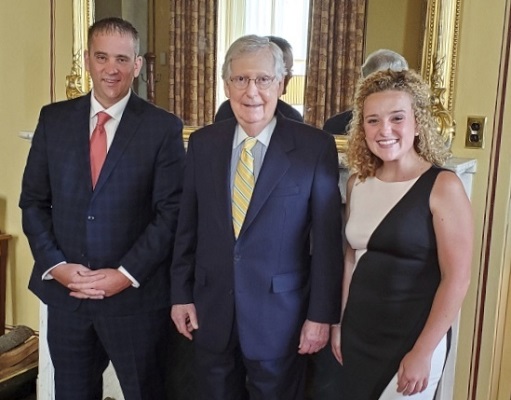 Following the hearing, Senator McConnell welcomed to his office in the U.S. Capitol Brian Furnish and his daughter, Gracie:

In December 2018, Furnish joined Senator McConnell at the White House as President Donald J. Trump signed the Farm Bill into law, which included the Senator's legislation to legalize hemp by removing it from the list of controlled substances as well as to expand research opportunities for the crop by making it eligible for competitive federal grants.

Furnish is an eighth-generation farmer in Kentucky and was the first licensed hemp grower in the United States since World War II. He shared with the Committee his experience growing different strains of hemp—for fiber, for seed, and for CBD. In addition to farming hemp, he also has experience in processing the crop. Furnish highlighted some of the challenges he faces as a grower, and how the federal government can help remove current barriers for the industry.

Senator McConnell introduced Furnish before the Committee, saying, "Brian and dozens of other Kentucky farmers hit the ground running with the pilot program I helped establish in 2014. Ever since, he's been planting more hemp and recognizing the crop's immense potential. Then my hemp legalization language the President signed into law last year opened new avenues for the crop's future in a variety of products.

"As this Committee reviews the implementation of my hemp initiative, I can think of no better voice to hear from than Brian Furnish. I'm also pleased to welcome his daughter, Gracie, who served as one of the National FFA officers last year and is currently attending the University of Kentucky. She's certainly following in her dad's footsteps as a strong voice for Kentucky's agricultural future."

During this opening statement before the Committee, Brian Furnish said, "We have learned a lot over the past 5 years but the hemp industry has a long way to go before it is mainstream production agriculture. Having a certified seed program for hemp would be a huge benefit to the hemp farmers. Now that hemp is legal we need to take a close look and remove, one by one, the barriers to success so hemp can be on the same production playing field as all the other crops.

"I have been for better or worse a farmer face of the hemp grower in the effort to finally make it legal here in the United States. I thank you for making this wonderful crop legal. But now what the hemp growers need and want is for this new and valuable crop to be just that, a crop, with the same opportunities to grow and fill the marketplace with new and valued products. Corn, wheat and soybeans all have hundreds and maybe thousands of product uses. Hemp can too, but they need the barriers removed and the consistency and stabilization which come from the regulatory framework you all can give us. On behalf of the hemp farmers and growers, I'm asking for that help."

Kentucky farmers are benefiting from hemp's resurgence. So far 101 of Kentucky's 120 counties are growing the crop with more than 200 processors operating statewide. Recently Kentucky Agriculture Commissioner Ryan Quarles announced that around $100 million worth of Kentucky-grown and processed hemp products are expected to be sold this year alone. Senator McConnell is committed to continue working with state and federal government agencies to support Kentucky hemp farmers, processors and manufacturers take full advantage of this hemp revolution.

For more information CLICK HERE or contact the Kentucky Homeplace Community Health Worker for Clay County, Kimberly Smith at 606-599-1039 or [email protected]
Brought to you by:
Kentucky Homeplace and the University of Kentucky Center of Excellence in Rural Health.

For more information CLICK HERE or contact the Kentucky Homeplace Community Health Worker for Clay County, Kimberly Smith at 606-599-1039 or [email protected]
Brought to you by:
Kentucky Homeplace and the University of Kentucky Center of Excellence in Rural Health.