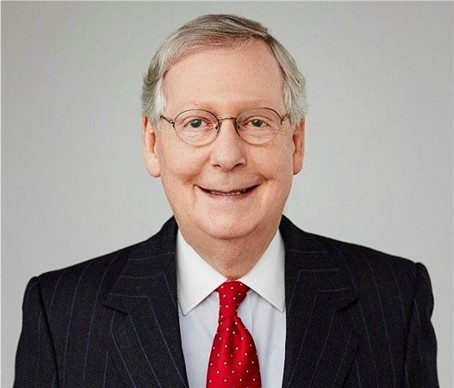 "Earlier this year, President Trump led the federal government to recognize our insecure southern border for what it is — a national emergency. A humanitarian and security crisis. Congress had heard plea after plea for more border security funding. We'd heard from senior leaders and career Border Patrol officers. We'd heard about the surging illegal crossings, the unprecedented numbers of family units, and the strain on our facilities.

"But Washington Democrats decided that giving this very real crisis the resources it required might anger the far left, which wants them to oppose President Trump at any cost. So the president tapped into longstanding, forty-plus-year-old presidential authorities and reprogrammed narrow sets of funds to address this urgent crisis.

"Now, I've never been shy about my commitment to the institution of the Congress and its unique authorities, not least being the appropriation of taxpayer dollars. But we are talking about forty-plus-year-old presidential authorities in current law. Unlike President Obama, who vaguely shrugged off the federal code when he established his DACA policy, President Trump's decision was squarely within existing law.

"Nevertheless, our Democratic colleagues made the Senate vote to undo the president's declaration, back in March. Their resolution fell far short of earning a veto-proof majority. Now, still unwilling to work with the president and Republicans on a long-term bipartisan solution for border security, Senate Democrats are making us repeat the same show vote again. I urge all my colleagues to once again vote for border security, and vote against the Democrats' resolution later today.

"Now, I understand that Democratic leadership would like to invent a false choice between border security and other important military construction projects. They want to tell the American people that we can either have border security or these other important projects, but for some reason we can't have both. There are two problems with that argument.

"Problem number one is that this is a false choice of Democrats' own invention. The only reason there could be any trade-off between border security and these other priorities is their refusal to support common-sense border funding. The only reason there's any trade-off is that Democrats have refused to work with the president. And problem number two with their argument is that Congress has full power to ensure all the military construction projects are fully funded. Work is ongoing on appropriations and the NDAA. It would be easy to ensure that these projects get all the money they need.

"So, later today, the Senate will vote on exactly that. We'll vote on several motions to instruct our NDAA conferees. And one of those motions will be a Republican proposal that we insist on fully funding these projects for our servicemembers. For the Kentuckians I represent, this is pretty simple. Kentuckians want our nation to have a secure southern border. Kentuckians want full funding for the middle school at Ft. Campbell — funding they've been waiting on for years. Funding I proudly secured in the first place.

"And Kentuckians know perfectly well that with everything the United States of America spends money on, there is no earthly reason why Democrats should force us to only have one or the other. They don't want to be used as pawns in Democrats' political games. Even my Democratic colleagues who don't support the administration's border security agenda should not take out their frustration on our armed forces. Every single member of this body should be able to support the measure to fully fund military construction. I urge all of my colleagues to vote 'yes' on the motion later today."