Measure would put the brakes on distracted driving

FRANKFORT, KY –A day after a tractor-trailer driver allegedly caused a fatal wreck while watching a video on his phone a few miles from the Capitol, a state lawmaker said an increase in the number of these types of tragedies prompted him to sponsor legislation designed to reduce distracted driving. 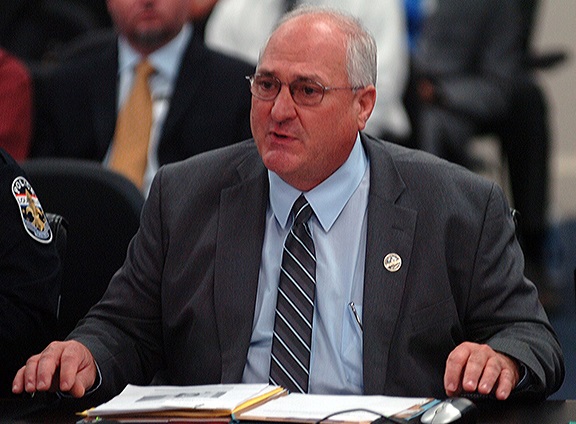 Rep. James Tipton, R-Taylorsville, made the comment while presenting the measure, known as Bill Request 166, during yesterday’s meeting of the Interim Joint Committee on Transportation. It is co-sponsored by Rep. Steve Sheldon, R-Bowling Green.

BR 166, dubbed the hands-free law, would ban drivers from using mobile phones, tablets, laptop computers and other personal communication devices. The law would carve out exceptions for voice-activated programs such as GPS navigation and hands-free calling. BR 166 would also prohibit drivers from watching, recording or broadcasting videos.

“Hands-free laws give law enforcement and the public a clear interpretation of the law,” said Jennifer Smith of Stopdistractions.org, who testified in support of BR 166. “If the phone is in your hand, then you are in violation. No more grey areas or loopholes. This law makes enforcement easy and possible.”

Kentucky’s current law prohibits drivers from texting while in motion.

Smith said 20 states currently have hands-free laws. In Tennessee, Smith said a poll found 91 percent of residents supported hands-free legislation when it was passed last year. In Georgia, Smith said that the law was credited with decreasing traffic fatalities by 3.4 percent in the first year after its passage. That was the largest decrease Georgia had seen in a decade.

While drivers were talking on their phones less, an Insurance Institute for Highway Safety study shared with the committee found drivers were interacting with their phone more. Drivers were observed manipulating their phones 57 percent more than they were in 2014, according to the study. That includes texting, browsing and even playing games.

“There is also a new group of drivers behind the wheel,” Smith said. “They are called cellphone addicts. These cellphone addicts are on the phone 28 percent of the time they are driving, actively ignoring the road.”

“There isn’t a day, or shift, that goes by where I don’t see drivers texting when they shouldn’t be,” he said.

Carl Breeding of the American Property and Casualty Insurers Association said BR 166 would also save Kentuckians on their auto insurance premiums. He said over several decades auto accident rates had been slowly but steadily declining, offsetting slightly increased accident severity.

“That has helped to keep car insurance rates relatively stable,” he said. “But starting in 2013, there was a sharp increase in accidents with the roads becoming increasingly dangerous – we believe in large part because of distracted driving.”

Rep. Maria Sorolis, D-Louisville, asked if listening to audiobooks would be prohibited under BR 166.

“There is no provision against listening,” Tipton said. “The main gist of this law is not to have a device in your hand.”

After hearing the testimony, committee Co-chair Rep. Ken Upchurch, R-Monticello, said distracted driving was “something that we need to address.”

He then asked what the fines would be for violating the proposed law. Tipton said the fine would be $100 for the first offense and $200 for any subsequent offense. He also noted the BR 166 would allow first-time offenders to attend state traffic school.

“This is not meant to be a money raiser for communities or the state,” Tipton said, “but you do have to have enough enforcement to make people aware of the issue.”