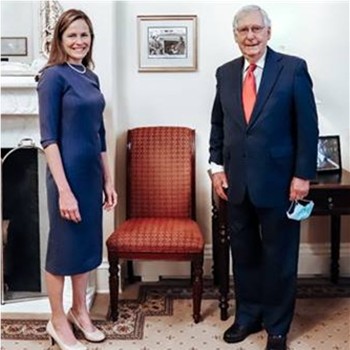 McConnell on Growing Threats of Religious Discrimination: "It's Not Just This One Nominee"

'Here is what the left is trying to say: "Oh, we have no problems with Judge Barrett's faith in an abstract sense — we just think it disqualifies her from this promotion." That is the definition of discrimination.'

"Like I said — much of the script [against Judge Barrett] has been predictable.

"But I'll tell you one thing I did not predict.

"I honestly did not expect the Democratic Leader to come to the Senate floor and say that concerns about anti-religious discrimination are, quote, 'manufactured hysterics.'

I did not expect we would hear the leader of the Democratic conference stand on the Senate floor and say that Americans' freedom of religion is, quote, '[an] imaginary issue.'

"The Democratic Leader claimed indignantly that his fellow Democrats would never -- never -- make an issue out of a nominee's personal religious beliefs. He took great offense such a thing would even be suggested.

"But the whole country knows that three years ago, when the Judiciary Committee was considering this very nominee for her current position, Senate Democrats did precisely that.

"The senior Senator for California literally implied in front of the entire country that Judge Barrett was too Catholic to be a judge. 'The dogma lives loudly within you, she said. 'And that's of concern.'

"The senior Senator for Illinois asked Judge Barrett, in the official record, 'Do you consider yourself an 'orthodox Catholic'?'

"The junior Senator for Hawaii felt compelled to tell the nominee, quote: 'You would be a Catholic judge.'

"Nobody imagined these exchanges. They happened. On video. Before the entire nation.

"Multiple sitting Senators fretted in an open hearing that Judge Barrett's religious views created doubts about her fitness to serve.

"Outside the Senate, it was not imaginary when one faith group in which Judge Barrett and her family participate reportedly came under cyberattack a few days ago. Their membership directory was reportedly hacked just as Judge Barrett emerged as a frontrunner.

"Nobody had to imagine the ominous articles from the AP, Reuters, the Washington Post, and Politico, all implying there was something questionable or problematic about Judge Barrett's faith practices.

"Nobody had to imagine Politico sending a contributing editor to snoop around church buildings and report what a youth group had written on their whiteboard.

"No, Americans don't have to imagine this elite disdain. They have to read it.

"It's not just this one nominee.

"Nobody imagined it when the junior Senator for Vermont accused a different nominee of hatred and Islamophobia because he'd previously expressed a personal view that Christianity gets things right which Islam gets wrong.

"It was not imaginary when the junior Senator for California cast aspersions on yet another nominee for belonging to the Knights of Columbus, and another Democrat implied he should quit this mainstream Catholic group if he wanted to hold public office.

"The Democratic Leader says these are manufactured hysterics. He says people who call this out are hysterical.

"Frankly, it would be better for our country if that were true. But it's not the case.

"Just yesterday, 24 hours after the Democratic Leader swore that Democrats would not make this an issue, the junior Senator for Hawaii tried to say Judge Barrett's faith is 'irrelevant,' but immediately proceeded to question 'whether her closely-held views can be separated from her ability to make objective, fair decisions.'

"No one should be deceived by these thinly-veiled euphemisms.

"This is the exact form that religious discrimination has taken in America for decades, especially when it's come to public service.

"We do not often hear people say they simply dislike a particular religion altogether. Thank goodness, we are mostly past that kind of bigotry.

"No, going all the way back to Jack Kennedy, the more common accusation has been something a little subtler:

"That people of deep faith, or certain faiths, are incapable of being fair or objective.

"That they're incapable of doing certain jobs well

"That such Americans are torn between divided loyalties and not to be trusted.

"Here is what the left is trying to say: Oh, we have no problems with Judge Barrett's faith in an abstract sense — we just think it disqualifies her from this promotion.

"That is the definition of discrimination.

"About a century ago, openly anti-Catholic political cartoons pictured the Pope or the Catholic Church as an octopus, wrapping its tentacles around the institutions of American government.

"Thankfully those open displays are long gone. But the core attitude clearly is not.

"Americans of faith are not imagining the increasingly hostile climate that the political left and the media have spent years sowing.

"And no, there is no free pass, as some commentators have suggested, because many prominent liberal voices or prominent Democrats themselves identify as Catholic.

"More than one fifth of our country belongs to the same Church as Judge Barrett. Tens and tens of millions of Americans.

"All of them, like all Americans, must be free to live their faiths in diverse and different ways without being barred from public service.

"These kinds of aspersions do not become any more acceptable if the call is coming from inside the house.

"Sadly, none of these problems are imaginary. The American people's concerns are not manufactured.

"The Little Sisters of the Poor did not wake up thinking it would be good fun if the Obama-Biden administration tried to force them to violate their own consciences. These nuns did not manufacture their lengthy legal battle for the fun of it.

"It was the secularizing left that went on offense.

"Churches across America did not go looking for one of this cycle's Democratic presidential contenders to suggest places of worship should lose their tax-exempt status if they preach or practice traditional teachings.

"It was the secularizing left that went on offense.

"If parts of the elite American left have become this out-of-touch with mainstream religious beliefs held by millions and millions of their fellow citizens, it will take more than victim-blaming to dig out of it.

"They could commit to evaluating Judge Barrett on her credentials and qualifications.

"And they could stop gawking at deeply religious Americans like they've encountered extraterrestrial life or have bought a ticket for a safari."