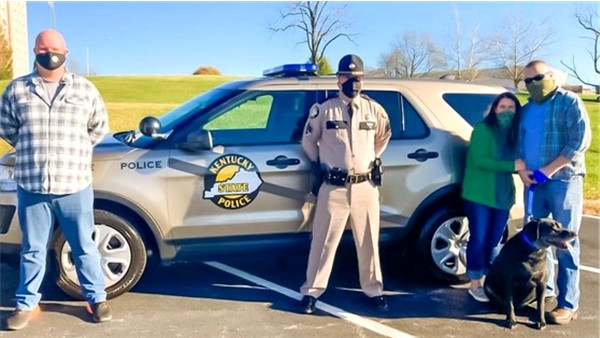 LONDON, KY (November 20, 2020) – Friday the 13th has been considered an unlucky day when it comes to superstition. This proved to be untrue this on Friday 13, 2020 when staff at the London Weight Station received an unplanned visitor.

Kentucky State Police (KSP) Sergeant Doug Stacy and facility maintenance Austin Dople, both employees with KSP Commercial Vehicle Enforcement, were working at the I-75 southbound location when they were approached by a frantic female motorist. Brittany Waddle told the pair that her husband, Chris Waddle was displaying signs of a possible heart attack.

Mrs. Waddle advised that she had contacted emergency services but that the ambulance was dealing with heavy traffic and having a difficult time reaching them. It was at that moment that Sergeant Stacy and Mr. Dople made the split second decision to transport the 40-year-old by patrol car to Baptist Health Hospital in Corbin, Kentucky.

After medical care, all eventually turned out well as Waddle was able to return home from the hospital just in time to celebrate his 40th birthday with his wife and four children. Officers have since learned that Waddle was a former law enforcement officer in the Madison County area who had medically retired due to vision loss and other health reasons.