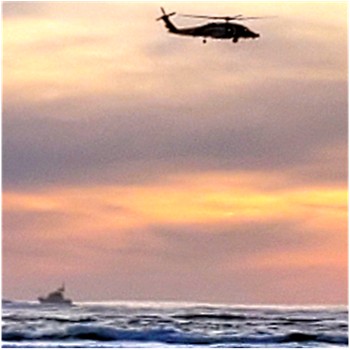 NETARTS BAY, OR - The Oregon State Police is reporting that: On Friday, November 27, 2020 at approximately 2:20 P.M., emergency personnel from the Oregon State Police, Tillamook County Sheriff's Office, Netarts Fire and Rescue, and the United States Coast Guard responded to a capsized boat at the mouth of Netarts Bay.

Preliminary investigation revealed that two people, Srun Hong (53) and Lyda Hong (41) both of Fairview, were crabbing in a small inflatable boat with an electric motor when the boat capsized in heavy surf.

Lyda Hong was recovered in the surf by a US Coast Guard helicopter crew. She was wearing a life jacket and was transported to Tillamook Regional Medical Center. She was treated and released.

Srun Hong, who was not wearing a life jacket, has not been located and is presumed drowned.