FRANKFORT, KY— A bill to create a new, fully funded hybrid tier for the Kentucky Teachers' Retirement System was approved by the Kentucky House of Representatives on Thursday. 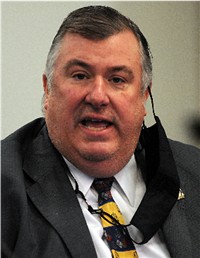 If it were to become law, House Bill 258, sponsored by Rep. C. Ed Massey, R-Hebron (left), would go into effect for non-university members of KTRS who join the system on or after Jan. 1, 2022.

"We're still gonna have to deal with this legacy deficit, but this will be a tourniquet that will stop the hemorrhaging that we've had with the increasing cost," Massey said during the House State Government Committee Meeting today, two hours before legislators convened in the House Chambers to vote on the bill.

Massey said he began work on HB 258 during the 2020 legislative session, and he's spent many months working with several legislators and various education groups to draft the legislation.

"We drafted the legislation. We went around the room and asked questions. We commented, we broke, and we came back together," Massey added. "And it was an ongoing, rewarding process."

HB 258 would create a safety net, or stabilization fund, in the event the funds drop too low, therefore preventing the pension from being underfunded, Massey said, adding it provides new teachers with something they can count on.

Massey said this gives people who have not made teaching a lifelong career an incentive to become a teacher later in life.

On the House Floor, several legislators said they liked some portions of the bill and how Massey worked with education groups to draft the legislation, but would not be voting in favor of it.

Rep. McKenzie Cantrell, D-Louisville, said HB 258 would be putting a burden on new hires and Rep. Patti Minter, D-Bowling Green, said pay raises for teachers should be the priority.

HB 258 passed the House 68-28 and will now move on to the Senate for consideration.