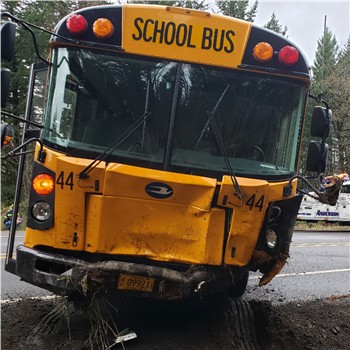 CRASH ON HIGHWAY 6 NEAR BANKS, OREGON INVOLVING A SCHOOL BUS

WASHINGTON COUNTY, OR - The Oregon State Police is reporting that: On Friday, November 19, 2021, at approximately 9:29 A.M., Oregon State Police responded to the report of a collision between a trailer being pulled by a Ford F550 and a school bus on Highway 6 near milepost 35, west of Banks.

Preliminary investigation revealed that a red 1999 Ford F550 truck pulling an unloaded flatbed trailer, operated by Frank Rich (64) of OTIS, was traveling westbound on Highway 6 near milepost 35 when the trailer began to fishtail uncontrollably and detached from the coupling. After separating from the truck, the trailer collided with the driver-side rear axle of the school bus.

There was a total of 6 adults, including the driver and 31 students on the bus.  Seven people were transported by medics to various hospitals with minor injures and as a precaution.

The driver of the Ford F550 was issued a citation for the operation of an unsafe vehicle. He did not have the correct coupling system for the trailer.

The Oregon State Police was assisted by the Washington County Sheriff's Office, Forest Grove Fire, and the Oregon Department of Transportation.