KENTUCKY'S "YEAR IN REVIEW" FROM THE DESK OF SECRETARY OF STATE MICHAEL G. ADAMS

FRANKFORT, KY - 2021 was a busy year for us, and one of the best ever for Kentucky voters. State lawmakers passed – nearly unanimously – House Bill 574, the most significant reform of our election system in more than 100 years. The bill makes several important changes to Kentucky’s elections moving forward.

Some Kentuckians were able to put the new laws to use in November while they voted in three special elections. All Kentuckians will get a chance to experience the new voting law when they head to the polls for the Primary Election on Tuesday, May 17, 2022.

While running for this job, I pledged we would clean up our voter rolls. That promise has been kept. We have removed more than 100,000 ineligible voters from our rolls, whether because they have moved away, passed away, or been put away.

But wait, there’s more. The Secretary of State is not only Kentucky’s chief election official, but also our chief business official. We made several reforms to make it easier to operate a business in Kentucky. By revising the Commonwealth’s Uniform Commercial Code regulations, we cut red tape, removing unnecessary impediments to Kentucky borrowers and lenders.

The new regulations replace confusing language, provide more flexibility for UCC filings through the use of a dedicated email address, and reduce the time and costs of obtaining certified searches and records required for closing loans by allowing the public to search and receive them digitally.

2021 saw a record number of Kentuckians start new businesses. There was a total of 52,227 business formations and foreign qualifications, a 20 percent increase over the previous year. 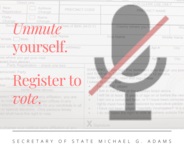 Inspired by one too many Zoom mistakes, we launched our new voter registration campaign, “Unmute yourself.”

Take a page from my book, “unmute yourself” and register to vote if you haven’t. It’s never been easier!

Lawmakers returned to Frankfort for the 2022 General Assembly session on January 4, and will consider numerous pressing issues, including improvements we suggested for our election system and our business environment.

Kentuckians will head to the polls again on May 17 to vote in our primary elections. All 6 of our U.S. House of Representatives seats, 1 U.S. Senate seat, all state House seats, half of state Senate seats, and most judicial seats will be on the ballot.

With elections just around the corner, now is the time to think about volunteering to be a poll worker. It takes around 15,000 poll workers to conduct an election. Whether you’re a Republican who prefers in-person voting to mail-in voting, or a Democrat who fears voter suppression, put your money where your mouth is and help us. Please consider stepping up to help with Kentucky’s elections - and feel free to contact us, or your county clerk.