This Week at the State Capitol in Frankfort, Kentucky 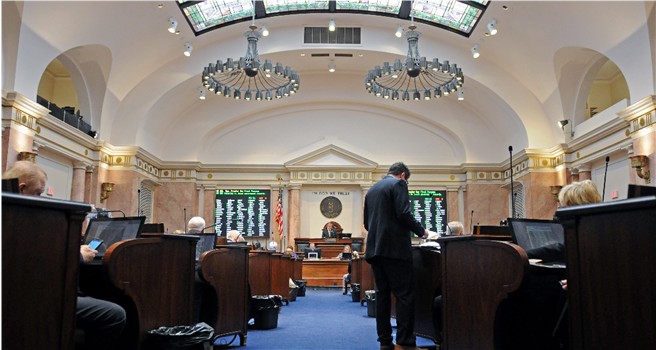 FRANKFORT, KY — The Kentucky General Assembly spent the last full week of the 2022 legislative session considering a torrent of bills on elections, abortion, religion and gambling. But no issue appeared to capture more of the spotlight than public schools.

Lawmakers sent two major bills on education to the governor’s desk this week, including one on early childhood literacy and a separate, much-debated package on academic standards.

Another measure on transgender athletes also received final passage, while a bill on charter schools cleared the House floor and several others related to education continued to move forward.

Only four days remain in this year’s regular session, and lawmakers are working to finalize bills before breaking next week for a 10-day veto recess. That gives the General Assembly time to override any vetoes from the governor before adjourning for the year.

Bipartisanship ran high on Tuesday when legislation on early childhood literacy – Senate Bill 9 – received a final nod in the Senate.

Known as the Read to Succeed Act, the bill calls for evidence-based learning techniques and intensive interventions to improve literacy outcomes and help struggling students in kindergarten through the third grade. It won final passage with unanimous support.

However, lawmakers faced steep divides throughout the week on Senate Bill 1.

The measure calls for local superintendents – rather than school councils – to determine educational curriculum. It was amended in the House to also include language from the Teaching American Principles Act, which would require instruction in social studies to align with a list of core concepts and documents that supporters say are central to American civics.

SB 1 cleared the House floor on Tuesday and secured final passage in the Senate on Thursday, but not before sparking lengthy debates in both chambers.

The vote on Senate Bill 83 was likewise split. The legislation would prevent male-to-female transgender students from participating in girls’ sports, starting in the sixth grade and running through college. It received final passage in the Senate on Thursday following similar debate.

Legislation related to charter schools – House Bill 9 – also moved off the House floor on Thursday with a divided vote. That bill would change the appeals process if a charter school application is denied by a local school board. It would also codify the funding mechanism for charters and authorize two pilot charter school projects.

At the beginning of the week, both the House and Senate voted to override gubernatorial vetoes on two measures.

The first, Senate Joint Resolution 150, officially ends the COVID-19 state of emergency in Kentucky. The other, House Bill 4, changes the benefits and the job search requirements for unemployment.

Meanwhile, many other bills continued to advance through the process this week. That includes legislation related to:

Serving alcohol: House Bill 252 would clear the way for 18-year-olds to sell and serve alcoholic beverages. It received final passage in the Senate on Monday and has been delivered to the governor.

Pari-mutuel wagering: House Bill 607 seeks to tax every pari-mutuel wager – including advance-deposit wagers and bets on simulcasts – at a standard 1.5%. It cleared the House floor on Monday.

Religious services: House Bill 43 calls for equal treatment of religious organizations during a state of emergency. The legislation was sent to the governor after receiving final passage in the Senate on Wednesday.

Parental rights: Senate Bill 40 calls on Kentucky courts to apply a strict scrutiny standard when considering the interests of parents in the care, custody and control of their children. It cleared the Senate floor on Wednesday.

Abortion: House Bill 3 would require physicians to seek permission from a minor’s parent or legal guardian before allowing the minor to undergo a chemical or surgical abortion. It passed out of the Senate Health and Welfare Committee on Wednesday.

Porch pirates: Senate Bill 23 would make it a class D felony to steal or destroy packages from common carriers and delivery services – similar to the penalty for stealing U.S. mail. The House Judiciary Committee advanced the bill out of committee on Wednesday.

Moment of silence: House Bill 102 would require public schools to implement a moment of silence or reflection at the start of each school day. It cleared the House floor on Wednesday.

School breakfasts: Senate Bill 151 calls on schools in the Federal School Breakfast Program to offer students up to 15 minutes to eat breakfast during instructional time. It received final passage in the House on Thursday.

Elections: Senate Bill 216 seeks to strengthen election security through multiple changes to state law. That includes preventing voting machines from being connected to the internet and eliminating credit and debit cards as a form of identification. It cleared the House floor on Thursday with changes.

Death penalty: House Bill 269 would add serious mental illness to the list of disabilities that disqualify offenders from execution if symptoms were occurring at the time of the offense. The Senate gave the bill final passage on Friday.

The General Assembly is scheduled to gavel back into session on Tuesday and Wednesday next week before breaking for the veto recess.

Citizens can also share their views on issues with lawmakers by calling the General Assembly’s toll-free message line at 1-800-372-7181.