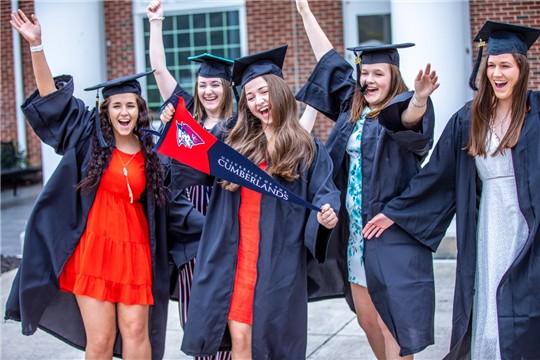 WILLIAMSBURG, KY – (May 6, 2022) University of the Cumberlands held commencement ceremonies last weekend to celebrate its newest graduates. Participants in this year's commencement ceremonies included graduates from 49 states and territories and the countries of Canada, India, Brazil, Spain, Africa, New Zealand, and Italy, among others. A total of 2,068 graduates received their degrees from Cumberlands during the weekend.

Cumberlands President Larry Cockrum opened the ceremonies offering heartfelt congratulations to the graduates as well as some advice and encouragement.

“Don’t stress out over things you can’t control. Even when things feel unsettled, we are all capable of a new and positive beginning,” he said. “Sometimes, the worst things in life that happen to you can be the best things that happen to you – if you don’t let the worst get the best of you. Have character. You will be remembered more for your kindness than for your accomplishments. And believe in yourself, no matter what happens.”

During commencement, Cumberlands administration commended its graduates who earned campus-wide awards based on their service to the community, impact on Cumberlands’ campus, academic achievement, and upstanding values.

The Algernon Sydney Sullivan and Mary Mildred Sullivan Awards honor a male and female student from the senior class who have made significant contributions to university life while demonstrating outstanding spiritual values.

The 2022 recipient of the Algernon Sydney Sullivan Award was Joshua Hash of Corbin, Kentucky. Josh majored in accounting and business administration with a minor in missions and ministry. He was an active member of the Campus Ministries leadership team, a residence hall director, and a campus ambassador in the Office of Admissions. He is planning on marrying his fiancée, Tristan Gibbs, and continuing work on staff with Residence Life at Cumberlands while he earns his Master of Business Administration.

The 2022 recipient of the Mary Mildred Sullivan Award was Tristan Gibbs of Corbin, Kentucky. Tristan was a biology major with a minor in communication arts. She was a National Merit Scholar, led a Bible study, volunteered with Appalachian Ministries, and served as a campus ambassador in the Office of Admissions. She is planning her wedding to her fiancé, Joshua Hash, and she is applying to dental school with the hope of becoming a general dentist.

The Gorman Jones and T.J. Roberts Campus Leadership Awards are given to a graduating senior who has exemplified the roles and qualities of leadership on campus while maintaining high academic standing.

The 2022 Gorman Jones Campus Leadership Award recipient was Katelynn Johnson of Williamsburg, Kentucky. Katelynn majored in accounting and business administration with a minor in information technology. She participated in several local community service projects and ministries, received the A.T. Siler Memorial Service Award in 2021, and was a member of a number of honor societies and clubs on campus. She plans to become a licensed CPA (Certified Public Accountant) and earn an MBA with a concentration in accounting.

The 2022 T.J. Roberts Campus Leadership Award recipient was Gannon Couch of Hindman, Kentucky. Gannon majored in business administration and accounting. He was a member of the track and field team, participated in an array of local community service projects and ministry opportunities, led a Bible study through his church, and served as an accounting tutor. He plans to marry and begin a full-time career as an accountant while he works to attain his CPA license in Kentucky.

In addition to academics, the university also places a high value on community service amongst the student body. As announced during commencement ceremonies, undergraduate students in the Class of 2022 performed 46,674 hours of community service. That equals 5,834 eight-hour work days and 1,166 forty-hour work weeks. With volunteer work valued at $25.43 per hour by the Corporation for National and Community Service, the total contribution from Cumberlands undergraduates in the Class of 2022 is $1,186,919.82. Students who contributed 200 or more hours of community service during their undergraduate careers are designated as Hutton Scholars by the university. Of the students whose degrees were conferred in spring 2022, there were 69 Hutton Scholars.

From everyone at University of the Cumberlands, congratulations, Class of 2022!