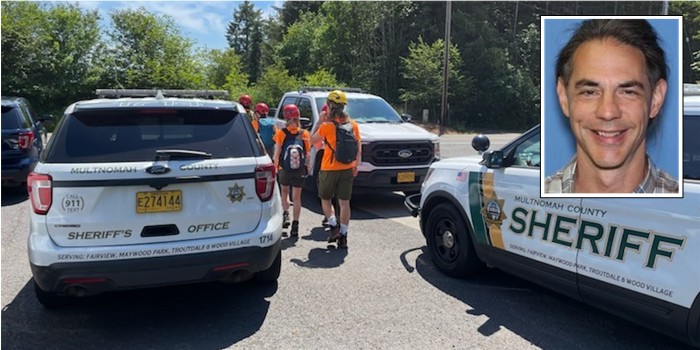 CORBETT, OR - On Tuesday, July 12, around 10:30 A.M., the Multnomah County Sheriff’s Office (MCSO) received a report of a missing man who reportedly went hiking and did not return home. It was reported that 53-year-old Christopher Smaka left his Portland residence on Monday morning to hike in the area of Gordon Creek. Smaka was not planning to camp overnight.

A special team of MCSO deputies, called the Green Hornets, quickly hiked down a trail near where the car was found. Green Hornets carry lightweight packs with emergency equipment, so they can deploy faster. Teams of MCSOSAR and CSAR members followed behind, searching as they worked their way down the trail. The trail, approximately 2 miles in length, ends at the Sandy River.

On the riverbank, searchers located Smaka’s personal belongings, including his identification and a pair of shoes.

Ground searchers fanned out along the riverbank. Two CSAR kayakers launched from Dodge Park to paddle the river. CSAR also launched a drone to search from above. Unfortunately, Smaka has not been located.

Search efforts were discontinued for the night. The Clackamas County Sheriff's Office is now leading search efforts. Media should direct any future questions related to the search to CCSO.

PHOTO: MCSOSAR members deploying to the hiking trail in search of of Christopher Smaka (inset).