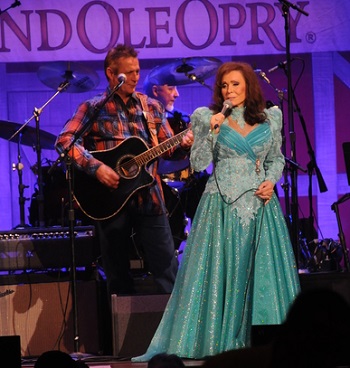 Loretta Lynn performing at the Ryman Auditorium in Nashville, TN

"We have lost one of Eastern Kentucky's brightest country music stars, Loretta Lynn, Johnson County's talented Coal Miner's Daughter. Her incredible voice and honest lyrics have resounded across the Appalachian Mountains and around the world, highlighting the resiliency and courage of the coal-mining region where she was born and raised. Starting from humble beginnings in Butcher Holler and becoming the "Queen of Country Music," Loretta inspired generations of gifted singers from the mountains. She set new records for country music throughout her successful career, earning all the industry's top awards, as well as a Lifetime Achievement Award, and the Presidential Medal of Freedom for her contributions to the arts. We were blessed by her voice, her story, and her determination to leave a legacy of hope that will endure for generations," said Congressman Rogers.

In April, Congressman Rogers commemorated Loretta Lynn's 90th birthday with a Congressional Tribute, recognizing the incredible impact that she has made in Kentucky's Appalachian region.

Picture: ClayCoNews stock photo from October 2014 by Stacey Clarke of Loretta Lynn performing at the Ryman Auditorium in Nashville, TN.