GRAY, KY - The Knox County, Ky Sheriff's Department is reporting that: On Sunday, June 9, 2019 Knox County Deputy Sam Mullins executed a search warrant at a camper being utilized as a residence on Garland Cemetery Road in Gray. 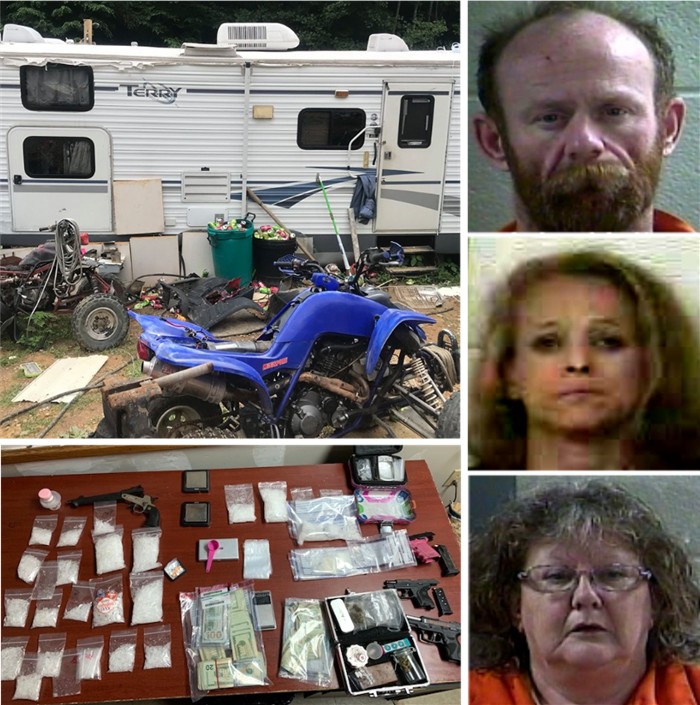 The search was the result of a two month investigation into complaints of illegal drug trafficking at that location. Deputy Mullins identified the man living in the camper as John Helton.

Deputy Mullins also learned that John Helton was wanted on a Whitley County Bench Warrant. On June 9, 2019, prior to the search, Deputy Mullins arrested John Douglas Helton age 44 of Gray, KY on the Whitley County Warrant for failure to appear on two counts of Trafficking in Controlled Substance-1st Degree and Persistent Felony Offender I. During the arrest a plastic bag containing suspected methamphetamine was located.

Deputy Mullins obtained and executed a search warrant on the premises. During the search approximately 1 pound of suspected Crystal Methamphetamine was located along with a small amount of marijuana, digital scales, three loaded handguns and over $800 in cash.

John Helton was then charged with Trafficking in Controlled Substance-1st Degree, Possession of Firearm by Convicted Felon and Possession of Marijuana.

Nursilla Anita Helton-Fox age 39 of Gray was also arrested and charged with Trafficking in Controlled Substance-1st Degree, and Possession of Drug Paraphernalia.

While conducting the investigation at the camper, information was developed connecting a residence on Highway 1223 in the Corbin area of Laurel County. A search was conducted at that residence. Approximately 2 pounds of suspected Crystal Meth and $8,000 in cash were located at that residence.

Patsy Hopkins age 63 of Corbin, KY was arrested and charged with Trafficking in Controlled Substance-1st Degree, Carrying Concealed Weapon Possession of Drug Paraphernalia and 4 counts of Wanton Endangerment-1st Degree. The wanton endangerment charges are due to the approximately 2 pounds of Crystal Meth being found hidden inside a playhouse being used by 4 children.