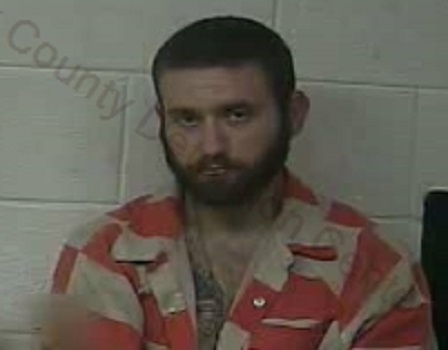 Upon attempting to make contact with the men, one who was lying prone in the leaves attempting to hide jumped to his feet and started running. Immediately apparent was a large Bowie-type knife on one hip and a holstered handgun on the other hip of the individual. A short foot chase then ensued.

After a 30 minute search, 26 year old Zachary Franke of Corbin was located hiding in high underbrush on a flat near a large high wall and taken into custody. He was found to be armed with the knife, but the holster had been ripped from his belt and a handgun hidden.

An identification check revealed that Franke, who had been unknown to deputies, was wanted and labeled armed and dangerous with violent tendencies. He had a parole violation warrant for attempted murder, absconding parole supervision, and violation of release conditions. A search of the area yielded the holster in a ditch, near where Franke was found.

Deputies and Sheriff Mike Smith searched the area as well as several residences for the handgun, as well as the second male. Neither were found, but the second male was identified and Franke was transported to the Knox County Detention Center on the outstanding warrant.

Zachary Franke has been charged with:

Assisting in the investigation and arrest were arresting deputies Elijah Broughton and Steve Owen along with Sheriff Mike Smith, Sgt. Carl Bolton, Deputy Mike Broughton, Deputy Pat Clouse, and Deputy Shawn Smith. There was also an unnamed civilian that assisted.