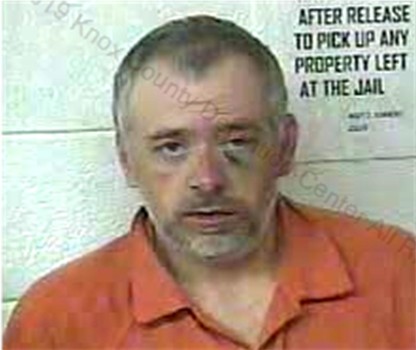 Deputy Ashurst canvassed the neighborhood for approximately an hour when he was flagged down by a person that stated she was awakened by a baby crying under her house and that a man carrying a baby fled into the woods when the deputy pulled up.

Deputy Ashurst entered the woods and was told by another man that he had found the baby.

The baby was soaked due to the heavy down pour of rain and was freezing. Deputy Ashurst continued the search and located Stoots hiding in the woods. Stoots was uncooperative, after a brief struggle Stoots was apprehended.

Christopher Stoots age 39 of Flat Lick, KY was arrested and charged with:

After being placed inside the patrol vehicle, Stoots ripped the inside panel off the door, he was then charged with:

Christopher Stoots was lodged in the Knox County Detention Center.

The female victim of the assault and the 3 year old child were transported to the Barbourville ARH for treatment by Knox EMS.