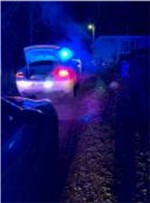 The arrests occurred off Old KY 30 approximately 5 miles north of London as the Sheriff's office investigated a shooting which occurred at a residence there at 1:21 A.M.

When detectives and deputies arrived at the scene, they learned that a male subject there had been shot with a pistol in the chest. The victim was identified as Michael Bailey age 28 of East Bernstadt.

The victim was flown to UK Hospital Lexington for treatment, and was pronounced deceased there.

During the investigation at the scene investigators determined that numerous individuals there were convicted felons.

The arrested individuals were identified as:

This individual admitted taking Meth prior to the shooting complaint.

All four arrested individuals were lodged in the Laurel County Correctional Center.

Photo of residence where the shooting occurred is attached to this report.

An autopsy is scheduled in Frankfort for Monday.