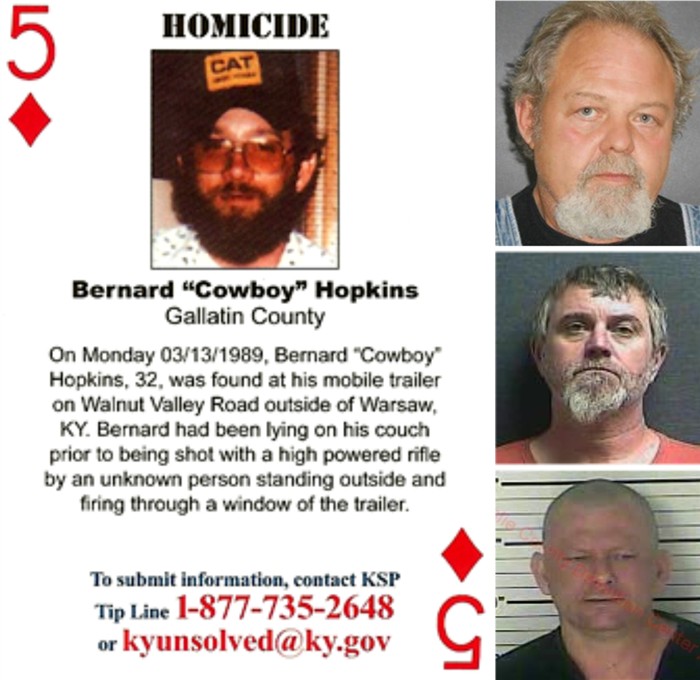 Curtis Wade Sharon, Shawn F. Satchwell, and Ricky H. Asher were arrested on Friday March 20th, 2020. These arrests stem from the investigation into the murder of Bernard “Cowboy” Hopkins, who was found killed in his residence in Gallatin County on March 13th, 1989.

The investigation has continued since it was first reported, eventually becoming a cold case. Through further investigation in more recent years and following up on new leads, Kentucky State Police detectives were able to develop persons of interest in the case.

Friday March 20th the case was presented to the Gallatin County Grand Jury, and indictment warrants were issued for the arrests of Sharon, Satchwell, and Asher.

In anticipation of the indictment warrants, Kentucky State Police and the above mentioned agencies prepared to act quickly in an effort to place these individuals under arrest.

Upon receiving verification of the warrants, law enforcement were able to locate and arrest all three individuals without incident.

Sharon has been charged with:

Satchwell has been charged with:

Asher has been charged with:

The case remains ongoing at this time.

The Gallatin County Commonwealth Attorney’s Office can be reached at email This email address is being protected from spambots. You need JavaScript enabled to view it., and phone number 859-586-1723.