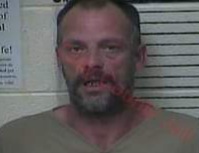 The arrest occurred when Deputy Brumley attempted to Conduct a traffic stop for vehicle infractions on North Highway 421 when the above mentioned subject accelerated the vehicle with attempt to elude Deputies.

The drive of the vehicle crossed into multiple counties and eventually ended back into Clay County on Bridge Branch Road when the vehicle became disabled the driver attempted to flee on foot.

The driver's vehicle rolled back and struck Deputy Brumley causing injury to him, after a brief foot pursuit and struggle the subject was placed under arrest without further incident.

Jonathan Brumley was charged with:

The photo attached is courtesy of the Clay County Detention Center