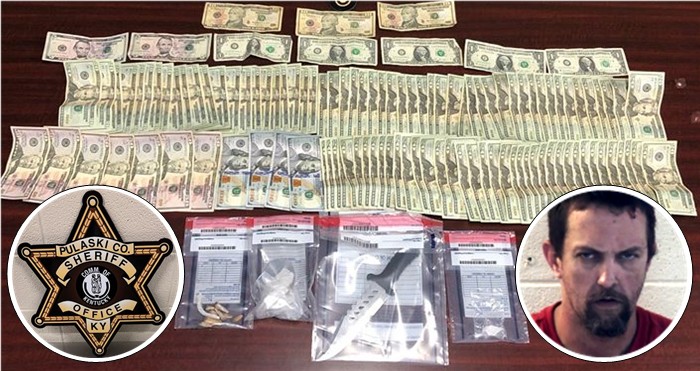 The pursuit continued onto Pulaski Ellison Road and then onto Ellison Eubank Road. The pursuit ended up in a soybean field. Ellis placed his vehicle in reverse, abandoned it, and fled on foot.

When he ran, the Deputies were yelling at the him to stop.

With the assistance of Sergeant Richard Smith's K-9, Deputies were able to catch the suspect. He then started to fight with the Deputies who were attempting to restrain him. Deputies were soon able to get him into handcuffs.

The pursuit began when Deputy Nathan Meadows saw a vehicle, later discovered to be driven by Joey Ellis, cross the center line on North Highway 1247 near Freedom Church Road and suspected him to be an impaired driver.

When Deputy Meadows activated his emergency equipment, Mr. Ellis refused to stop. Deputy Meadows observed Mr. Ellis driving entirely on the left side of the roadway as well as running three different stop signs without slowing down. He then saw Mr. Ellis drive off into a soybean field and exit the vehicle to flee on foot.

Before exiting the vehicle, the Mr. Ellis put his vehicle in reverse. His vehicle began moving backward and struck Sergeant Richard Smith's (who had joined the pursuit) vehicle and then continued back onto the roadway and struck Deputy Meadow’s vehicle as well. Both Deputies patrol vehicles sustained significant damage. After Deputies arrested him he was charged with the following charges.

When Deputies searched the vehicle, they located a cigarette pack that contained precisely 2.2 grams of a white crystal-like substance suspected to be Methamphetamine. Also located were several Marijuana cigarettes, loose baggies, and exactly $2,635.00 cash in U.S. currency.

Deputy Marcus Harrison, who arrived and assisted with the search of the vehicle, charged Joey Ellis with:

When the suspect was identified, Pulaski County 911 Dispatch told the Deputies that the suspect had an active Indictment Warrant for his arrest.

This warrant was the result of an investigation back in February 2020, in which Detective Matt Bryant, with the Pulaski County Sheriff's Office, served a search warrant on Valley Drive in Science Hill, KY (This was a previous address of Joey Ellis). In this search warrant, drugs were located, mainly Methamphetamine was found.

During the follow-up investigation, Detective Matt Bryant discovered that Mr. Ellis had a prior felony conviction in 2014 for:

Trafficking in a Controlled Substance – First Degree -Methamphetamine from McCreary County.  In this Indictment, signed June 3, 2020, Mr. Ellis was charged with:

These indictments were served by Deputy Nathan Meadows.

Joey Ellis was taken to the Lake Cumberland Regional Hospital for minor injuries and was then transported to the Pulaski County Detention Center, where he remains lodged as of this press release.

Sheriff Greg Speck asked that if you have any information about drug activity or any crime to contact our office. You can also leave a tip on our webpage at http://www.pulaskisheriff.com. You can remain anonymous.