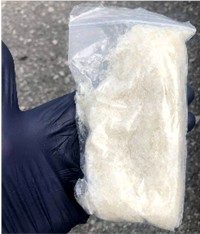 The arrest occurred on Saturday morning September 12, 2020 at approximately 11:53 A.M. off Rockcastle River Forestry Road off I-75 approximately 9 miles north of London following a traffic stop conducted on a white Chevrolet Impala where deputies found a large quantity of a crystal like substance suspected to be crystal Methamphetamine and a large sum of US currency.

Shawn Brewer was charged with:

Inset photo of the accused is courtesy of the Laurel County Correctional Center.

Assisting the sheriff’s office at  the scene was London City Police K-9 officer Jacob Bormann whose K-9 alerted on the vehicle during the investigation.