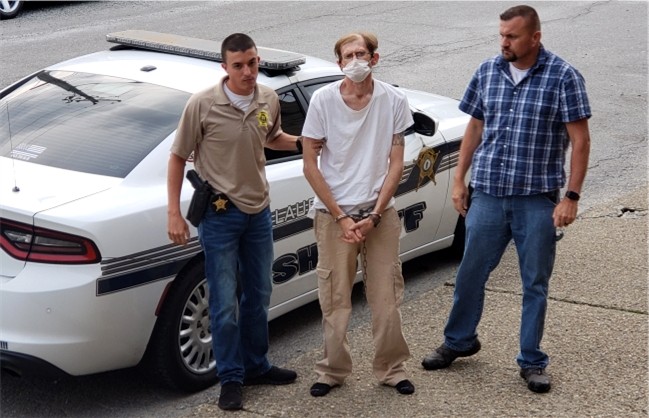 Sheriff's Detectives/Deputies at the scene off TomCat Trail

Sheriff's investigators found the two victims in the living room area of the house and reported that both apparently died from multiple gunshot wounds. An autopsy will be conducted on Wednesday in Frankfort .

The two victims were identified as:

Johnny Benge age 69 and his wife Mary Benge age 66 both of Tomcat Trail, London, Ky., both pronounced deceased at the scene by the Laurel County Coroner's office.

The suspect is identified as the son of couple killed and is identified as: Joseph L. Benge age 40 of London who left  the scene afterwards in the family's white 2015 Ford Taurus and was presumed to be armed and dangerous.

Laurel Sheriff's officials immediately filed a stolen vehicle report on the vehicle putting out an all points bulletin for other agencies to be on the lookout for the suspect vehicle.

Laurel Sheriff’s investigators also were able to ping the suspect’s cell phone determining that the suspect was in the Mayfield, Kentucky area.

Laurel sheriff’s investigators notified area police agencies in the Mayfield area to be on the lookout for the suspect and his vehicle. The Kentucky State Police at Mayfield, Kentucky located the suspect vehicle late on Tuesday night and conducted a traffic stop taking him into custody without incident.

A weapon was found in the vehicle.

Laurel County Sheriff's Detectives Taylor McDaniel and Detective James Sizemore traveled to Mayfield, Kentucky to pick the suspect up and return him to Laurel County. In addition, the car will be returned to London.

This individual will be lodged in the Laurel County Correctional Center.

Photo of suspect and photo of crime scene on Tomcat Trail attached to this report.  Investigation is continuing by Laurel Sheriff’s Detective Taylor McDaniel, lead investigator.