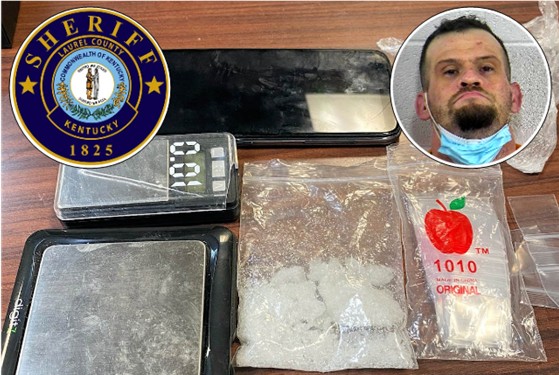 The arrest occurred off Highway 770 in a business parking lot approximately 10 miles South of London after Deputy Collett conducted a traffic stop on a black colored Lincoln with an expired registration plate.

During the traffic stop the driver was found in possession of suspected Methamphetamine, operating on a suspended or revoked operator's license and had license plates not assigned to his vehicle.

Upon arrest, the suspect was placed in custody, however, as deputies continued their investigation on the suspect’s vehicle, the suspect fled on foot for approximately 150 yards running behind a building but deputies gave chase and were able to take the suspect back into custody.

Deputies then found a large amount of suspected Methamphetamine, small baggies, and scales in the suspect vehicle.

Joshua Ray Walters was charged with: