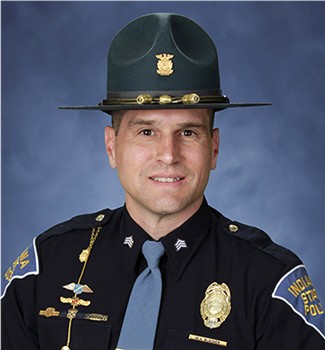 During his career with the Indiana State Police, Sgt. Blocher was a member of the SCUBA team, a SWAT sniper, an investigator and most recently a supervisor for the Electronic Surveillance Unit. More information about his ISP career can be found in the obituary below.

Captain Tony Delello, Indiana State Police Area Five Commander, and longtime friend to Sgt. Blocher said, "Mitch stood strong on his values, to include his family, his faith and his community. His passion for his career and public safety was apparent in every aspect of his life. He worked tirelessly for twenty-five years to ensure safety in his community and beyond. Mitch will be remembered as a loyal leader who was a mentor to many."

The funeral will be available to view  on a live stream Saturday January 16  at 12 p.m. on Nine Star Connect.

Sgt. Mitchell “Mitch” Alan Blocher, 49, fought the good fight against brain cancer and victoriously finished the race to meet his Savior on January 2, 2021. Mitch was born on June 26, 1971 in Wabash, Indiana to Alan Leroy and Carol Ann (Barton) Blocher.

Immediately after graduating from Ball State University in 1994, Mitch was accepted by the Indiana State Police and attended the Indiana Law Enforcement Academy. He graduated on December 22, 1995 and was sworn in as an Indiana State Trooper on December 24, 1995. During his 25 years of active service with the Indiana State Police, Mitch served on the Emergency Response Team as a Sniper from 2004-2008 and the Underwater Search & Rescue Team from 1998-2004 and 2009-2013 where he was a Dive Master. In 2012, he was promoted to Sergeant and in 2013 was assigned to the Electronic Surveillance Team where he served as Sergeant until his passing. For his heroic achievements during his career, Mitch also received many awards and recognitions, including numerous honors from the Mothers Against Drunk Driving organization, the International Association of Auto Theft Investigators Award in 2010, the Sherlock Award for Fraud Investigation, the US Secret Service Certificate of Appreciation, the US Attorney’s Award for Outstanding Contribution to a Prosecution, and the 2010 Indiana State Police Outstanding Investigator of the Year Award.

The brightest part of Mitch’s life began on December 5, 1998 when he married fellow BSU Cardinal, Angeline Sunier. Mitch and Angeline settled in Hancock County and began a family with the birth of their oldest son Samuel “Sam” Ray in 2002. Their youngest son, Joseph “Joey” Henry followed in 2004. Mitch enjoyed spending time camping with his family, having backyard bonfires, grilling out and was a favorite fan at his sons’ athletic & academic events. An avid runner, Mitch completed the Indianapolis 500 Festival Mini-Marathon many times and in 2014 was awarded the prestigious 500 Club Award, finishing 267th place overall.

Mitch unreservedly loved people and gave special attention to Eastern Hancock Schools and Wilkinson Church of Christ. He was a founding member of the EH Education Foundation, was invited to the EH Leadership Team and received the Loyal Royal award in 2020 from the EH Athletic Boosters. At WCC, Mitch helped with any and every Men’s Ministry function and was an ever-present welcoming face to each person coming in the door, even during his cancer battle. In 2018, Mitch ran a full marathon with Team World Vision at the Indy Monumental Marathon, raising money for clean water around the globe.

Everything about Mitch, from his life, throughout his sickness, and to his death was ultimately to fulfill his greatest purpose on this earth - to point others to his Lord and Savior, Jesus Christ. There is nothing that would bring more fulfillment to Mitch’s legacy than for people to meet Jesus through his story. He lived the words of Paul, “Follow my example, as I follow the example of Christ.” (1 Corinthians 11:1 NIV)

He was preceded in death by his maternal and paternal grandparents, sister, Tamara Dawson and niece, Emma Menze.

Funeral services will be private and by invitation only. Those wishing to view the service via Live Webcast will be able to Saturday, January 16, at 12:00 p.m. that will be broadcast through NineStar (a link will be posted when available). To show love and support to the Blocher family, you may meet at Eastern Hancock Schools parking lot on Saturday at approximately 1:30 p.m. to see the family and funeral procession. (More information to follow.) In addition, there will be a Celebration of Life service at Wilkinson Church of Christ on Saturday, June 26, 2021.

In lieu of flowers, monetary contributions can be made in Mitch’s memory to the Eastern Hancock Education Foundation or Cops for Kids of Indiana, Inc. Edible arrangements will also be accepted.

Arrangements have been entrusted to Hinsey-Brown Funeral Service Knightstown Chapel. You may express condolences or share a memory of Mitch at https://www.hinsey-brown.com/.
Print   Email