The arrest occurred off Curry Road after Sheriff's detectives followed up on a lead regarding a theft investigated by Detective Reed where allegedly a wallet was left in a basket at a business off Blackwater Road approximately 10 miles east of London on Monday and the wallet was stolen from the basket and removed from the store after the victim accidentally left the wallet in the basket. 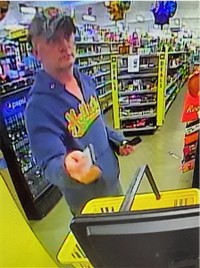 A press release was posted on the Laurel County Sheriff's Office Facebook page about the theft with a surveillance photo (left) and within five minutes numerous tips naming Chad Curry as the suspect were received.

Sheriff's detectives traveled to Curry’s residence and located him and asked him about the wallet which he removed from his back pocket and gave to detectives.

The suspect was arrested and during arrest found in possession of suspected Methamphetamine.

Chad Curry is charged with: