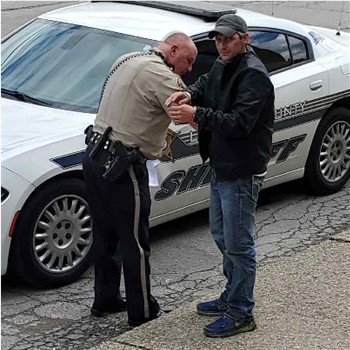 LONDON, KY - Laurel County Sheriff John Root is reporting that: Laurel Sheriff's Lieut./Accident Reconstructionist Chris Edwards along with Sheriff's detectives and deputies investigated an incident which resulted in a death that occurred on Pine Grove school Road approximately 4 miles South of London on Wednesday morning April 21, 2021 at approximately 8:55 AM.

Sheriff's investigators reported that allegedly William Petrey was driving a Chevrolet Colorado pickup truck with a female in the back of the pickup screaming for the driver to stop the truck however the driver continued along the roadway running off the roadway striking two fence posts and a tree ejecting the female from the back of the pickup truck causing her to strike a barn resulting in fatal injuries.

The pickup truck continued across the field of the barn out of control before coming to rest.

The victim is identified as Rebecca Warren age 37 of London, KY – pronounced deceased at the scene by the Laurel County Coroner's office.

Photos of the crash site and investigation by the Laurel County Sheriff's office are attached to this report.

Photo of accused William Petrey being escorted to a Sheriff's cruiser following arrest also attached to this report.