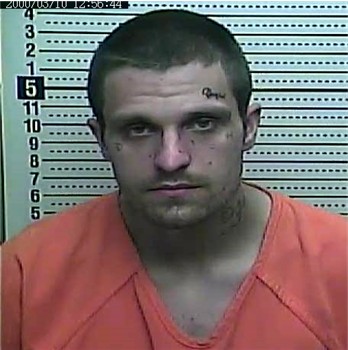 HARLAN, KY (May 11, 2021) – On May 8, 2021 at 1:41 P.M. Kentucky State Police, Post 10 Harlan received a call about an individual being shot at East Brook Station in Harlan County. Troopers from Post 10 responded and began an investigation.

Troopers located Derek Tindell (31) who had been shot multiple times.

Mr. Tindell was transported to Harlan ARH for treatment and then transferred to University of Kentucky Medical Center for precautionary reasons but listed in stable condition.

Just prior to trooper's arrival to the scene, Dylan Turner fled from the scene on foot.

KSP is currently attempting to locate Mr. Turner and feels this was an isolated incident.

Kentucky State Police arrested Dylan Turner on May 11, 2021 in Cumberland KY with charges from this incident.

Mr. Turner was lodged into the Harlan County Detention Center charged with:

Photo of the accused courtesy of the Harlan County Detention Center.