Board of Education in a Southeast Kentucky County is Attempting to Remove a Historical Cemetery from It's Property where Indians, Civil War & U.S. Veterans are Buried

MANCHESTER, KY (June 10, 2021) - Even though ClayCoNews is not currently doing any reporting other than official press releases, but due to being contacted several times by members of multiple families in Clay and surrounding southeast Kentucky counties regarding the Hoskins Cemetery in Manchester an exception was made earlier this week in order to look into the matter.

Inquiries by ClayCoNews had been submitted earlier in the week & today to local and state officials as well as the Southeast Kentucky Soponi Nation regarding the cemetery.

In replies to our inquiries, it appeared that most officials actually knew very little about the cemetery other than it was not a county issue as of today Thursday June 10, 2021.

However, this afternoon, we learned that the Clay County Board of Education intends to petition the Clay County Fiscal Court for permission to relocate all graves in the Hoskins Cemetery.

In order to document the condition of the cemetery, ClayCoNews publisher Ron Curry this afternoon accompanied Gordon Miller, a resident of Clay County, Kentucky to the Hoskins Cemetery.

Mr. Gordon Miller has many relatives buried in the Hoskins Cemetery

James QuietWolf Sizemore, Chief of the South Eastern KY. Saponi Nation did reply to our inquiry with this this statement:

To whom it Concerns:

I am letting everyone know of my objection to the plans for removing the buried at the Hoskins Cemetery/Graveyard on Island Creek in Clay County, KY.

Any such action also shows a great disrespect for the Native American Indians and their descendants as well as disrespect for all the U.S. Solders that fought and died for this great country and their surviving families.

We cannot as a people allow this to go forward. I urge all of our Veterans and their Families as well as the Native American Indian Families to add their voices to stopping this terrible act of total Disrespect!

After speaking with the Clay County Circuit Court Clerk's office (contrary to what was being told to us) we did learn that, unless it's filed under a different name, the Hoskins Cemetery in Manchester has at this time (Thursday June 10, 2021) not been declared as "abandoned".

Later, after being tipped off, we found this notice that's currently being run in the Manchester Enterprise, a local printed publication with what is believed to be a much dwindling readership: 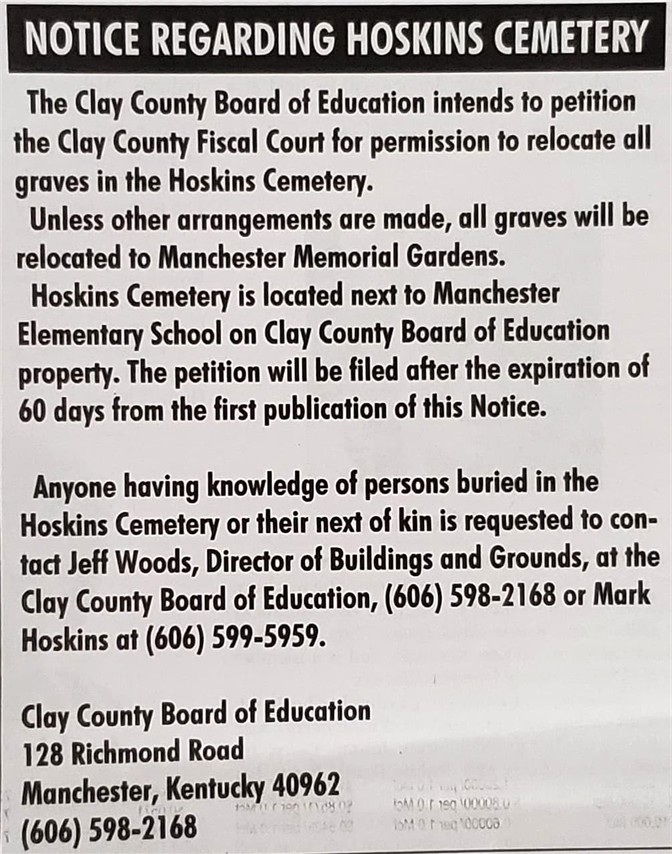