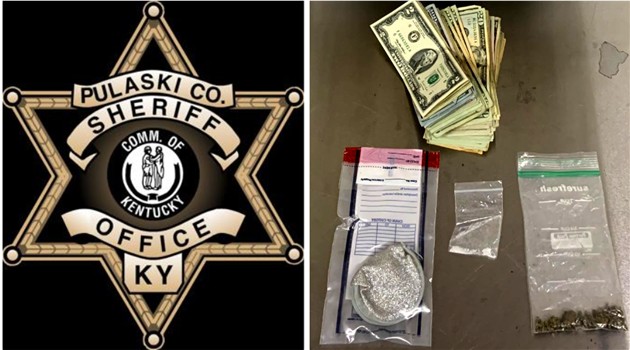 SOMERSET, KY - Pulaski County Sheriff Greg Speck is reporting that on December 29, 2021, at approximately 12:06 AM, Deputy Tan Hudson and Deputy Noah Wesley encountered a 2004 Acura at a gas station near the Southeastern By-Pass (KY 914) near the 911 Dispatch Center. The Deputies investigation led to a search of the vehicle. Deputies checked the license plate on the vehicle and learned that the car had been reported stolen.

There was a male and a female sitting in the back seat of the car and another female out pumping gas. The female in the back was identified as Brittany Woliver, age 32, from Carter Sells Road in Johnson City, Tennessee. Deputies noticed a strong odor of Marijuana coming from the car.

Located in the vehicle in a pouch was what Deputies suspected to be Fentanyl.

Further investigation revealed another vehicle parked behind the Acura with two males in it. One of the males was identified as Justin Proffitt, age 32, of Dalton Lane in Somerset, Kentucky.

The Deputies learned that Mr. Proffitt had an arrest warrant from the Kentucky Parole Board for Absconding (Fugitive) from Parole Supervision and Failure to Comply with Treatment Program for Substance Abuse. He was arrested for the warrant at that time.

Deputies then searched the second car and found a wallet with 2,908.00 dollars in cash that belonged to Mr. Proffitt.

While Mr. Proffitt was in the back seat of the Sheriff's vehicle, he became ill, and an ambulance was called to the scene.

After the ambulance arrived, Mr. Proffitt stated that he had consumed some illegal drugs, but he didn't know how much.

After Mr. Proffitt was removed by the ambulance, a small amount of suspected Methamphetamine and Marijuana was located in the back seat of the Sheriff's vehicle.

It was confirmed through Pulaski County 911 Dispatch that the 2004 Acura was stolen out of Tennessee and that Brittany Woliver, the female in the back seat of the Acura, was the person who had allegedly stolen the car.

Brittany Woliver was arrested and charged with:

She was also charged with:

She was transported to the Pulaski County Detention Center, where she remains lodged as of this press release.

After Justin Proffitt was treated and released from Lake Cumberland Regional Hospital, he was transported to the Pulaski County Detention Center.

In addition to serving the Parole Warrant, he was also charged with:

Mr. Proffitt remains lodged in the Pulaski County Detention Center as of this press release.

All illegal drugs and cash were logged into evidence at the Pulaski County Sheriff's Office. The illegal drugs will be sent to the Kentucky State Police Forensic Lab for examination.

This case remains under investigation by Deputy Tan Hudson and Deputy Noah Wesley.

Sheriff Greg Speck asked that if you have any information about drug activity or any crime, contact our office at 606-678-5145. You can remain anonymous. You can also leave a tip on our webpage at http://www.pulaskisheriff.com