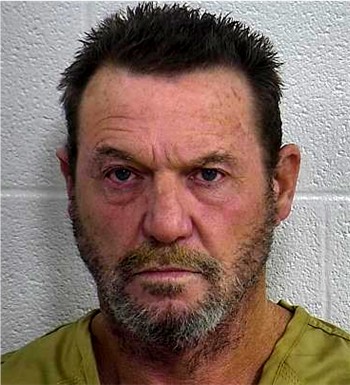 The arrest occurred on Johnson Road – KY 472, approximately  1 mile east of London while Sgt. Mehler and others were attempting to clear traffic crashes which had occurred there at the peak of a snowstorm.

A County fire truck was being pulled from the ditch there and traffic was backed up and stopped for a lengthy distance as a towing service was attempting to pull the fire truck from the ditch.

Two employees from the towing service and two county fire personnel were outside on the roadway along with a state salt truck attempting to salt the roadway there.

Sgt. Mehler reported that during this event that a black colored Chevrolet Lumina operated by Jimmy Dean Gray traveled in the wrong lane of traffic around traffic which was sitting still and proceeded at a high rate of speed around stopped vehicles and personnel in the roadway there.

Sgt. Mehler noted that the roadways were covered with ice and approximately 5 to 6 inches of snow.

The Lumina slid off the roadway as he attempted to go around traffic and attempted to accelerate and went down the ditch line approximately 40 yards before the vehicle came to a stop.

Jimmy Dean Gray was charged with: