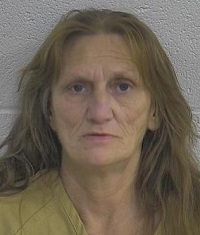 The arrest occurred on Murray Cemetery Road approximately 6 miles north of London following a traffic stop conducted on a white Dodge sedan that was driving erratically.

During the traffic stop Deputy Houston noted finding the driver in possession of a glass pipe with residue.

This individual stated that she had taken meth earlier.

Loretta Lynn Smith was charged with:

Photo of traffic stop is from the Laurel County Sheriff's Office.