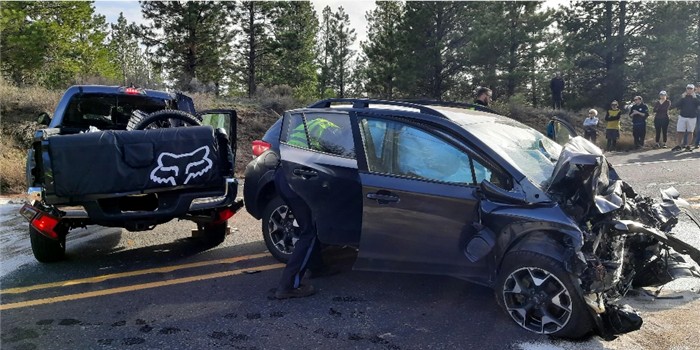 DESCHUTES COUNTY, OR (April 4, 2022) - The Oregon State Police is reporting that: On Friday, April 1, 2022, at approximately 4:45 P.M., OSP Troopers and emergency personnel responded to a two-vehicle crash on Highway 372 (Cascade Lakes Highway) near milepost 7.

The preliminary investigation revealed that an eastbound gray Subaru Crosstrek, operated by Forrest Anton-Erik (23) of Bend, crossed over a double yellow line and collided head-on with a westbound blue Toyota pickup, operated by Catherine Hane (27) of Weaverville, CA.

OSP wants to remind everyone to not drive while impaired. There are many options available to get home safely such as rideshares, public transportation, or designated drivers.

This crash is still under investigation. OSP is seeking public assistance from anyone who might have witnessed this event and they are encouraged to contact OSP at 1-800-452-7888 or *OSP (*677). Please reference SP22-078481.

OSP was assisted by the Deschutes County Sheriff's Department, the Oregon Department of Transportation, and Bend Fire & Rescue.