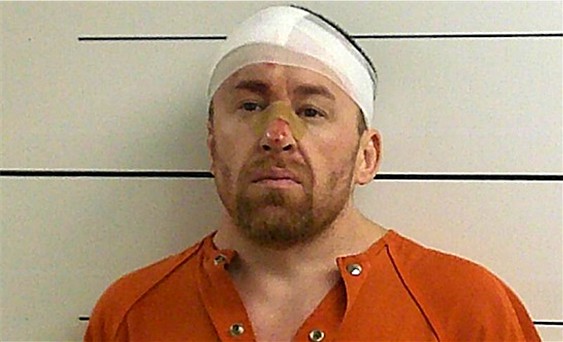 After Troopers arrived on scene, they learned the Flatwoods Police Department had received a call of a suspicious person in the area of Bay Berry Townhomes.  When Officer Tommy Robinson arrived on scene he encountered the suspect, Jonathan Smithers (DOB 12-21-1980).

Shortly after making contact with Mr. Smithers, Officer Robinson was shot in the neck.  Mr. Smithers then fled the scene on foot.

As the search continued into the morning hours, Trooper Hartsell observed a subject walking in the area of Argillite Road that matched the description of Mr. Smithers.

When Trooper Hartsell made contact with Mr. Smithers, he attempted to elude him by running across Argillite Road and through the Dollar General parking lot.

Trooper Hartsell gave pursuit of the suspect and deployed his agency issued Taser which was successful.  Mr. Smithers was then arrested without further incident.

During the Taser deployment, Mr. Smithers fell and sustained a laceration to his forehead, which was treated immediately by Greenup EMS.

Mr. Smithers received further treatment at Kings Daughters Medical Center and then released at which point he was arrested.

Jonathan Smithers was charged with the following:

Smithers was lodged in the Boyd County Detention Center where according to jail records, he is being held on a CASH BOND of $250,000.00

Sgt. Cramer is handling the attempted murder of Officer Robinson.

Additional charges are pending upon the completion of a through investigation.

The Kentucky State Police was assisted by:

The Kentucky State Police would like to thank the community for the outpouring of tips and leads in the help of apprehending of Mr. Smithers.