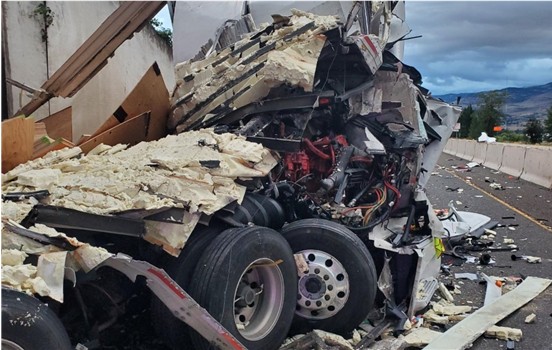 JACKSON COUNTY, OR - (July 6, 2022) - The Oregon State Police is reporting that on Tuesday, July 5, 2022 at approximately 6:26 PM, OSP Troopers and emergency personnel responded to a two commercial motor vehicle crash on Interstate 5 southbound near milepost 11.

The preliminary investigation revealed southbound traffic had slowed to approximately 35 miles per hour when a white International CMV, operated by Theresa Thompson (58) of Albany, rear-ended a Freightliner CMV, operated by Kirpal Singh (50) of Ontario, Canada. Both CMV’s were fully loaded with plywood which spilled onto the interstate.

Thompson was extricated and transported to an area hospital for non-life-threatening injuries.

OSP was assisted by Dick’s Towing and ODOT.