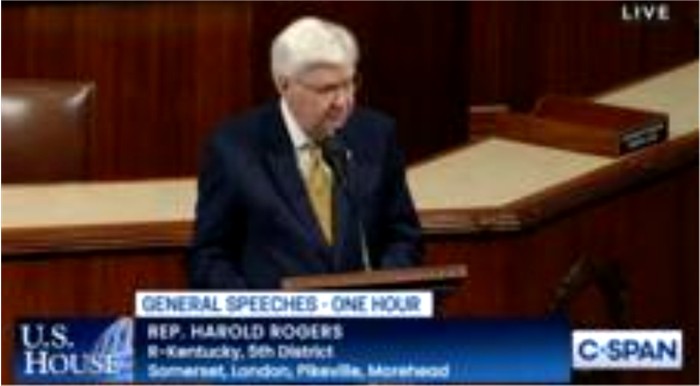 U.S. Rep. Harold "Hal" Rogers giving tribute to the memory of three fallen heroes and a canine in Eastern Kentucky on the floor of the U.S. House of Representatives

WASHINGTON, DC -- U.S. Rep. Harold "Hal" Rogers (KY-05) requested a moment of silence on the floor of the U.S. House of Representatives Friday to honor the three fallen Eastern Kentucky police officers and a canine who were killed in the line of duty on June 30, 2022 in Allen, Kentucky.

Congressman Rogers gave the following tribute in memory of the officers who gave the ultimate sacrifice for the people of Floyd County and the Commonwealth of Kentucky.

"Madam Speaker, I rise today to pay tribute to the memory of three fallen heroes in Eastern Kentucky. Last week, we laid to rest three police officers and one service canine who were slain in the line of duty after enduring unexpected gunfire in Allen, Kentucky on June 30, 2022.

"Finally, a beloved K-9 Drago, a well-trained service dog for the Floyd County Sheriff's Department. Needless to say, the heartbreak and pain that have reverberated across Eastern Kentucky at the loss of these brave men who dedicated their lives to serving and protecting our local people, has been overwhelming.

"President Theodore Roosevelt, who was a former New York City Police Commissioner once said, "No man is worth his salt, who is not ready at all times to risk his body, to risk his well-being, to risk his life in a great cause." On Thursday, June 30, 2022, these officers and many other first responders risked their lives as they valiantly answered the call of duty to protect the people of the Commonwealth of Kentucky.

"Their heroic deaths represent a powerful display of the selfless love described in John 15:13, 'Greater love has no man than this: to lay down his life for his friends.' Even as we speak, several other first responders are also recovering from their injuries from that horrific day – and our prayers are with them and their families.

"In a nation where police forces have been vilified in recent years by the actions of a few bad actors, may the lives of these brave men be a reminder of the outstanding integrity and sacrifice that the thin blue line represents. We must continue to support our law enforcement officers across the United States, ensuring they are fully equipped, adequately prepared, and never at the mercy of evildoers.

"This nation owes a great debt of gratitude for the life and service of Officers Petrey, Frasure and Chaffins. May their loved ones find abundant peace and confidence in Matthew 5:9, 'Blessed are the peacemakers, for they will be called children of God.'

"Madam Speaker, I would like to ask this body to recognize a moment of silence in memory of William Petrey, Ralph Frasure, Jacob Chaffins, and K-9 Drago.

"Thank you, and I yield back."