Two Arrests and one of the Largest Drug Seizures ever for Police Department of a City in Southern Kentucky occurred in June after lengthy Multiple Agency Collaborative Investigation, Cash and Weapons were also seized

Crystal meth seized as a result of five-month collaborative investigation

SOMERSET, KY — The City of Somerset, Kentucky is reporting that: A collaboration between Somerset Police Department (SPD) and state and federal law enforcement partners has resulted in one of the largest drug seizures in SPD’s history.

Two Somerset men — Wesley Aaron Calhoun and Dennie A. Smith — have been indicted in U.S. District Court and 30 pounds of Crystal Methamphetamine seized in a five-month joint investigation between: 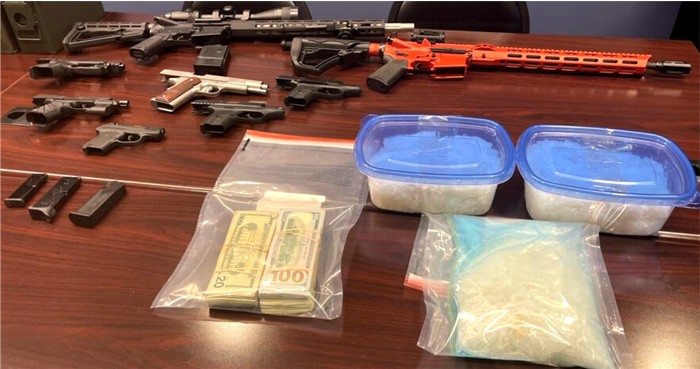 Somerset Police Chief William Hunt said the case illustrates the effectiveness of collaboration between law enforcement agencies and is the result of a united vision between SPD and the current administration to improve and maintain public safety.

“When Mayor (Alan) Keck took office three years ago, we had a vision for taking our narcotics division from one investigator to three and getting an officer assigned to the DEA Task Force to increase our capacity for conducting drug investigations,” Hunt said. “Our hope was that one day, doing so would lead to major seizures like this one.”

“Because of these changes, we’re having a greater impact on public safety in our community, and we have more opportunities to develop relationships with state and federal partners,” Hunt said. “I am grateful to Mayor Keck and the Somerset City Council for seeing our vision and giving us the resources to extend our investigations.”

The work that led to this record-breaking seizure began in February. SPD Ofc. Logan Warren uncovered 10 grams of meth and a safe when conducting a search warrant at Smith’s home. A second warrant was obtained by an SPD narcotics detective and Ofc. Scott Whitaker to search the safe, uncovering 4.5 ounces of meth and an undisclosed amount of cash. The SPD narcotics team then notified its DEA Task Force officer, who partnered with the FBI and spent the next few months tracking the activity of both Smith and Calhoun. By June, the two had been apprehended and the full volume of drugs, cash and weapons seized.

Wesley Aaron Calhoun and Dennie A. Smith were each charged with:

Calhoun was also charged with:

Investigations like these often take months, Hunt said, and are the culmination of many hours of interviews, surveillance and smaller arrests that lead to valuable information about more significant drug activity. SPD often does not disclose information obtained or arrests made along the way, in an effort to maintain the integrity of investigations and give second chances to those who cooperate.

“We take a holistic approach to our investigations,” Hunt said. “We truly believe in giving people an opportunity to come back into our community to be productive citizens. We do not advertise or release every large possession or small trafficking offense we make because we want people to have a second chance. And we are strategic in how we communicate about drug investigations because the public availability of information could jeopardize them.”

SPD made 282 drug arrests in 2021, which represents 14 percent of the total arrest volume.

“Even though this investigation started with our patrol officers, such a significant seizure would not have been possible without having representation on the DEA Task Force,” Hunt said. “I’m grateful for our collaboration with the DEA and other state and federal partners who are helping extend our agency’s reach further than ever before.”