LONDON, KY (July 27, 2022) - Laurel County Sheriff John Root is reporting that: The wrong-way driver allegedly involved in the triple fatal traffic crash which occurred Monday night July 25, 2022 at approximately 10:58 P.M. in the southbound lanes of I–75 near exit 38 has been released from UK Medical Center in Lexington.

The subject was transported back to Laurel County by Sgt. Paige VanHook to the Laurel County Sheriff's office. There, Sheriff's Lt. Chris Edwards, the case officer, executed a warrant charging the subject with three counts of Murder.

It is suspected that the accused was intoxicated at the time of the collision. 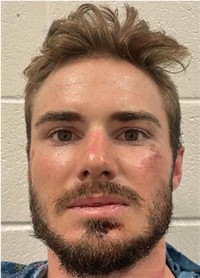 The accused individual is identified as: Joshua S. Poore age 21 of Clovis, California.

Joshua Poore is charged with:

This individual was lodged in the Laurel County Correctional Center, where according to JailTracker he is being held on a $1,000,000.00 CASH bond.

Investigators report that apparently a Toyota Tacoma pickup traveling north in the southbound lanes of I–75 collided with a southbound Nissan Altima causing catastrophic damage to both vehicles.

Laurel 911 had received numerous calls of a wrong-way driver traveling north in the southbound lanes prior to the crash.

All three occupants in the Nissan Altima were pronounced deceased at the scene. Laurel County Sheriff John Root is reporting that: The 3 deceased victims are all from the Chicago, Illinois area and have been identified as:

The driver of the wrong-way vehicle – the Toyota Tacoma pickup is identified as: Joshua Poore age 21 of Clovis, California received severe but not life-threatening injuries was transported by Ambulance Inc. of Laurel County to University of Kentucky Hospital in Lexington. This individual is in the custody of the Laurel County Sheriff's Office.

Charges are expected on the wrong-way driver and will be posted upon the execution of warrants.