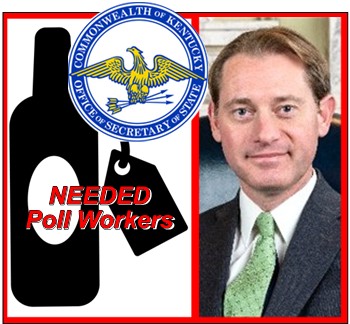 Adams launched his “SOS From Your SOS” campaign in 2020 to recruit desperately needed poll workers after thousands of volunteers across the state – mostly senior citizens – declined to participate prior to the availability of a COVID-19 vaccine. Now, with pervasive election misinformation threatening to stunt poll worker recruitment for the 2022 election, Adams is taking action again with help from the private sector.

“I’m grateful for the help, and the patriotism, of Kentucky’s independent breweries and wineries,” Adams said. “We need a new generation to step up and join our seniors in working the polls.”

The hang tags to be placed on wine bottles and beer growlers request volunteers to work the polls in November, and have QR codes directing to govote.ky.gov where imbibers can apply to be poll workers (after they sober up).

The program helped recruit thousands of poll workers in 2020.

“We took part in the SOS From Your SOS campaign in 2020, and jumped at the chance to participate again,” said Charley Hamilton, owner of Dreaming Creek Brewery. “We are happy to help with poll worker recruitment while our customers enjoy our beer. This campaign will hopefully draw in some folks who may not have thought about volunteering.”

“We are excited to help Secretary Adams with poll worker recruitment,” said Don Davis, owner of Carriage House Vineyards. “The hang tags make it easy for our customers to apply to become poll workers while they sample our wine.”

Participating breweries (so far) are:

Participating wineries (so far) are: