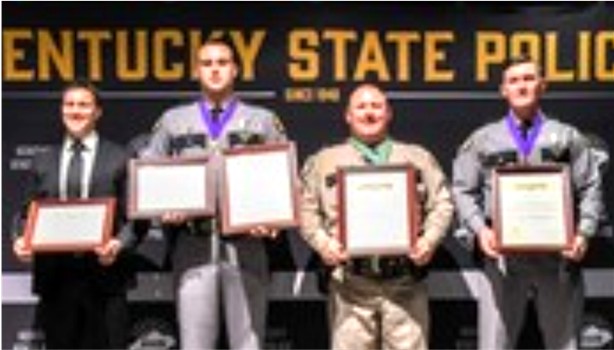 COLUMBIA, KY – The Kentucky State Police (KSP) held its annual sworn awards ceremony in Lexington to honor 75 Troopers and Officers who put on a uniform each day to patrol Kentucky’s neighborhoods with a mission of serving and protecting their fellow citizens. The achievement awards presented were for acts of bravery and service that occurred in 2021.

During the ceremony, KSP Commissioner Phillip Burnett Jr. recognized the agency’s Troopers and Officers for going beyond the mission of KSP in 2021 to protect and serve the citizens of the commonwealth by responding to two historic natural disasters, running into unthinkable dangers, assisting with the continued fight against the deadly drug epidemic and answering thousands of calls for service.

Five Troopers and Officers from the Post 15 area were included in those honors.

Detective Nicholas Davis was named 2021 Post 15 Detective of the Year. Detective Davis is a 12-year veteran of KSP assigned to Post 15 Columbia.

Post 15 Commander Captain Bradley Stotts said he is proud of the commitment and efforts of these Troopers and Officers.

KSP’s focus this year is to maintain and strengthen its essential workforce in order to better provide public safety, maintain critical services and better reflect the diverse communities that KSP serves. For more information about KSP’s commitment of creating a better Kentucky by making the commonwealth’s streets safer, communities stronger and the nation more secure by providing exceptional law enforcement,  click here.