The arrest occurred on I–75 off the northbound lanes approximately 6 miles South of London after deputies were dispatched to a complaint of a male subject dancing on the side of the interstate.

As deputies responded to the scene, they received information on an attempt to locate a possible stolen red Cadillac SUV reported from the Knox County Sheriff's Office.

Deputies then received an additional call of a male subject dancing near a vehicle alongside the interstate.

Upon arrival at the scene deputies noted that a male subject jumped out of the passenger side of the vehicle and began fleeing on foot running up a hill into a wooded area where he attempted to jump a fence but fell.

Deputy Wilson gave verbal commands to the suspect who failed to comply and following a brief scuffle the suspect was taken into custody.

Deputy Wilson noted a strong odor of alcoholic beverages emitting from the subject who stated that he was hammered. 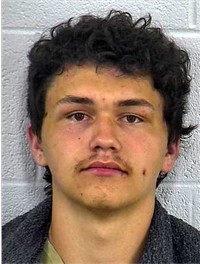 Alexander Reliford (right) was charged with: