COMPLAINT: Female Subject crawled out of ditch off Kentucky HWY 3094 in Laurel County and allegedly assaults Two People before being located on the Ground bleeding after Another allgeded Assault 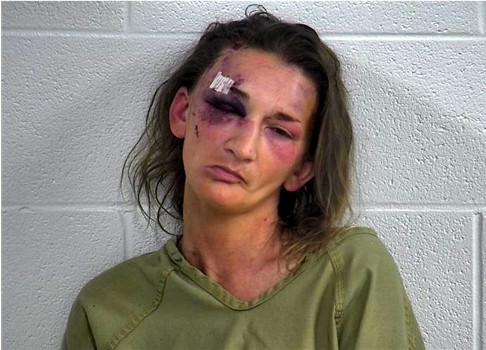 The arrest occurred off old KY 30 approximately 3 miles north of London after deputies were dispatched to a complaint of an assault occurring off Highway 3094.

Deputies learned that the female subject had then apparently left in a vehicle and was found at another residence where she allegedly assaulted a male subject there. Deputies located the female suspect laying on the ground bleeding from her face and detected a strong odor of alcoholic beverages emitting from her.

Deputies called for an ambulance and while awaiting the ambulance the suspect created a disturbance in the presence of bystanders including small children. Deputies detained the suspect in the police cruiser where at one point the suspect kicked Deputy Saylor several times.

The suspect failed to comply with EMS personnel that had arrived to transport her to the hospital.

Deputies transported her to the hospital and at the hospital the suspect became combative, screaming, yelling and cursing and spitting on hospital emergency room staff.

Upon release from the hospital the suspect was transported to the Laurel County Correctional Center.

Nikki Reed–Hoskins was charged with:

The subject was also wanted on an outstanding Laurel District Court bench warrant of arrest charging failure to appear in court on charges of: