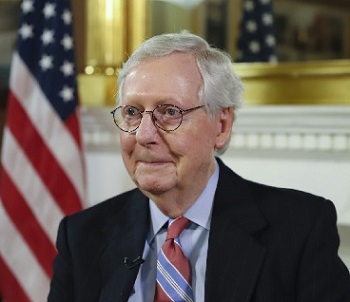 “Washington Democrats’ runaway inflation has caused a nationwide crisis. It’s put working families and small businesses in a bind from coast to coast.

“Since President Biden took office, inflation has shot up a staggering 13.2%.

“For the average American household, this translates to hundreds and hundreds of extra dollars every month. Working overtime just to barely tread water.

“In my home state of Kentucky, for example, the Democrats’ inflation has forced proud, hardworking families to ask for help putting food on the table. In some cases for the first time in their lives.

“The director of the Jessamine County Food Pantry in Nicholasville says, ‘Our numbers here are going up like crazy… We have problems actually getting food now. We’re actually not giving away as much as we were just a couple months ago because I can’t find it, and I can’t afford it sometimes when I can find it.’

“And of courses these challenges aren’t limited to our Commonwealth.

“In coastal Georgia, the director of a network of food banks says distribution at her facilities had increased 38% from July to August. Meeting the increased demand has meant stomaching steep spikes in meat and dairy prices.

“And Senate Republicans tried to stop it. We warned against inflation. We tried to block their $2 trillion inflationary bill. We offered amendments. But all three of those states have two Senators who both voted in lockstep on party lines to ram through the trillions of dollars.

“One hundred percent of the United States Senators from those states voted to bring this on.

“This is what it happens when Washington Democrats put their own priorities ahead of the people’s.”