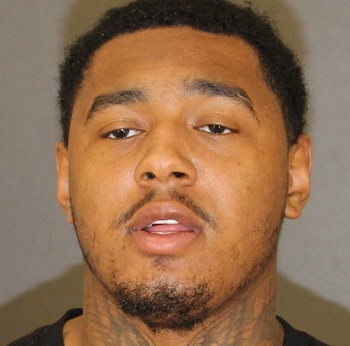 James David Thomas, a wanted fugitive by the Baltimore City Police Department, was located and arrested on September 21, 2022 at an apartment in the 1200 block of West Mount Royal Avenue in Baltimore.

After being arrested on two open warrants, James David Thomas, 25, of Baltimore is charged with:

Thomas is being held at Baltimore Central Booking where he faces these additional charges placed by the Maryland State Police.

Aniya Kaylen Winslow, 23, of Baltimore is also charged in connection with the investigation. After consultation with the Baltimore City Commissioner’s Office, she was served with a criminal summons charging her with:

During Thomas’ arrest on the open warrant on September 21, 2022 a Maryland State trooper observed one live round of ammunition on the floor. Maryland State Police subsequently applied for a search and seizure warrant.

Shortly after 11:00 A.M., troopers executed the search warrant on the apartment which resulted in the recovery of:

Police located the firearm between the mattress and box spring in the bedroom.

During the investigation, troopers learned the gun was reported stolen on February 5, 2021 through the Metropolitan Police Department in Washington, D.C.

Thomas was also found to be: