JACKSON COUNTY, OR (September 26, 2022) - The Oregon State Police is reporting that on Thursday, September 22, 2022, the OSP Southwest Region Drug Enforcement Section team, with assistance from several other agencies, served search warrants on two separate locations in Prospect, Jackson County: a warehouse near 1st. Street and an address in the 400 block of Red Blanket Road. 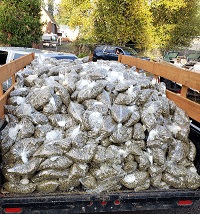 Located at the warehouse property were one firearm and approximately 1,800 pounds of illegal, processed marijuana packaged for transport/sale on the black market.

One individual, Yasmany Mesa, age 30, was detained, identified, interviewed, and subsequently lodged in the Jackson County Jail on the charges of:

All illegal Marijuana seized at both locations was ultimately destroyed.

Located and seized at the Red Blanket address were: 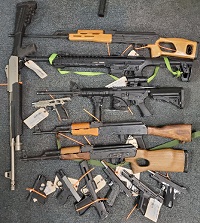 The investigation is ongoing with no further information available for release.