The arrest occurred in a business parking lot off KY 770 approximately 10 miles South of London after deputies were dispatched to a complaint of a female armed with a handgun standing outside the store.

While enroute to the scene deputies were advised of an additional call received that shots had been fired there.

When deputies arrived at the scene they located the female subject standing next to a semi truck holding a pistol.

Deputies gave commands to the female to put the weapon down and after multiple commands, the female dropped the gun.

Deputies conducted an investigation talking to multiple witnesses and learned that allegedly the subject had fired the pistol in an area toward a nearby hotel and I–75. The suspect also had allegedly pointed the firearm at business employees there. 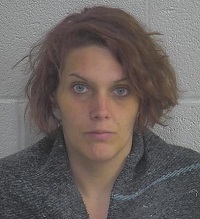 Kendra Bain (right) was charged with:

In addition, the suspect was charged on a Laurel District Court bench warrant of arrest charging failure to appear in court on charges of:

Photo of the accused is courtesy of Laurel County Correctional Center.